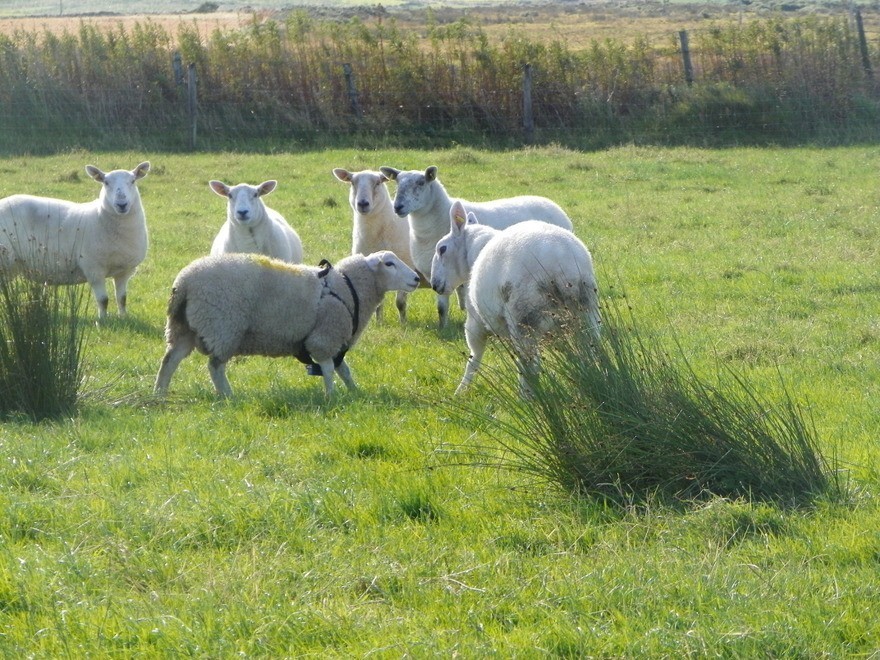 Time to introduce new blood to our little flock

It’s that time of year again when the tup is once again reunited with the ewes in the hope that they will produce a lovely crop of lambs next spring.  This year it’s been more fun than usual – but not for us.

We have to introduce new blood into the flock so our old ram who has a gentle nature, unlike some we’ve had in the past, needs to move on and we have acquired two new boys.  They are only youngsters born earlier this year so as yet unproven.  One is a pure bred Lleyn and the other a Texel Suffolk cross.  Both will be a good match for our girls who are a mix of Lleyn, Suffolk and Cheviot so they are not small beasts.

This year we decided to stagger the lambing as there is not enough room in the shed for all of them at the same time, so we picked the first batch of girls and put the Lleyn tup in.  We had a harness and crayon on him so that we could tell when he’d done his job but since he is not yet fully grown, it was far too big.  We had to remove it as it was hampering his efforts. The next morning we discovered to our horror that the old ram had managed to break through the fence and was busy courting the ewes who were promised to the new boy.  We had quite a job persuading him to leave.

Four weeks later we put the second new tup, the Texel Suffolk cross, in with the remainder of the girls and once again went out the next morning, only to find that he preferred the ones betrothed to the Lleyn and was busy chatting them up.  It was a Monday morning and we had all of the weekend orders to pack but we found ourselves in the field chasing sheep and getting splattered with mud!

With all the wet weather we’ve had, the posts are loose and the fences are barely holding anything in.  We have had to move everything around so there is no danger of beasts escaping.  For the time being they are all where they should be but who knows how long that will last.  Now we have to wait 5 months to see the results of all our efforts and find out if the boys were up to the challenge.