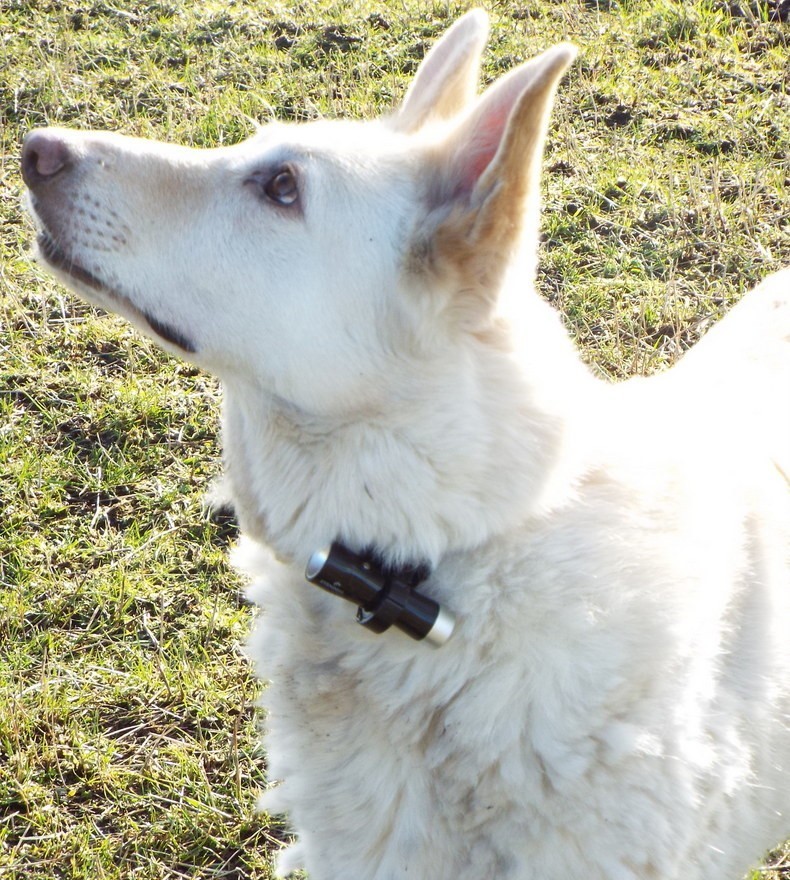 The Eyenimal Dog Videocam is a small cylindrical video camera that fits onto your dog’s collar or harness, and records activities from their point of view. We tried one out with Daisy, one of our GSDs.

Once fully charged using the USB cable supplied, the camera was fitted to her collar using the bracket. This holds the camera in place but alows you to rotate it to get the best angle – a very useful feature.  The collar was tightened a little to stop it from sliding around her neck, and off we went. 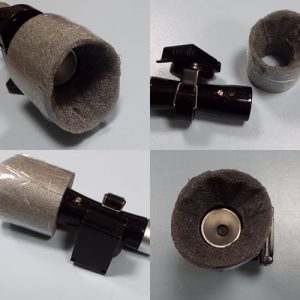 Daisy’s fur could best be described at ‘medium’ in length, but it is quite thick at her neck and we found at first that it could obscure the front of the camera.

We tried various things to overcome this, the most successful of which was to use a short piece of 22mm foam pipe lagging.

It has been shaped slightly inside to keep the view clear and has a soft feel, so it doesn’t cause any discomfort but is snug enough to stay in place on the barrel of the camera. Short or close coated dogs obviously wouldn’t have this problem.

The next step was to position the camera so that it pointed where we wanted it to – forwards, and with the top of the camera actually at the top (otherwise you would end up recording upside down!).

Because we walk our dogs in the fields we use for our sheep, Daisy has a tendency to move around with her nose low to the ground, which in turn causes her to angle her neck, so it took a couple of attempts before we got the right position. The adjustment on the bracket makes this quite easy to do, and after about the third or fourth walk (checking the footage on a pc in between), we were fairly happy with it. We seemed to develop a feel for it eventually, so even if it is jogged out of place, it can be returned quickly.

Not all of the video gave us picturesque views of course, and there are definitely many sections of ‘blades of grass’ and so on, but overall the quality of the video is good and we found it immensly entertaining to watch her and our other dogs in action. We can also see how it might be quite useful in a training situation, and hope to try out the idea in future.

It isn’t just for dogs either. This camera is supplied with a cap that can accomodate the holding bracket, so you can record with it too!

We have only tried the continuous recording mode, but you can also select motion detect or stationary detect modes.

Here are some of Daisy’s highlights: