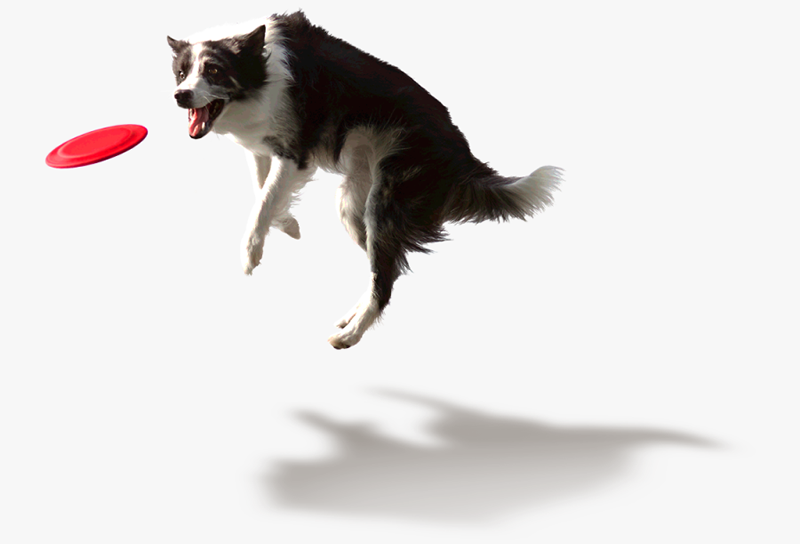 Most people have heard of dog agility, and probably a lot of people have had a go at it, but what if you haven’t got the space for all that equipment? How about trying some alternative dog sports that get you outside with your dog(s) and that you can do together. Or if you are both competitive types, take part with other sporty dog lovers. 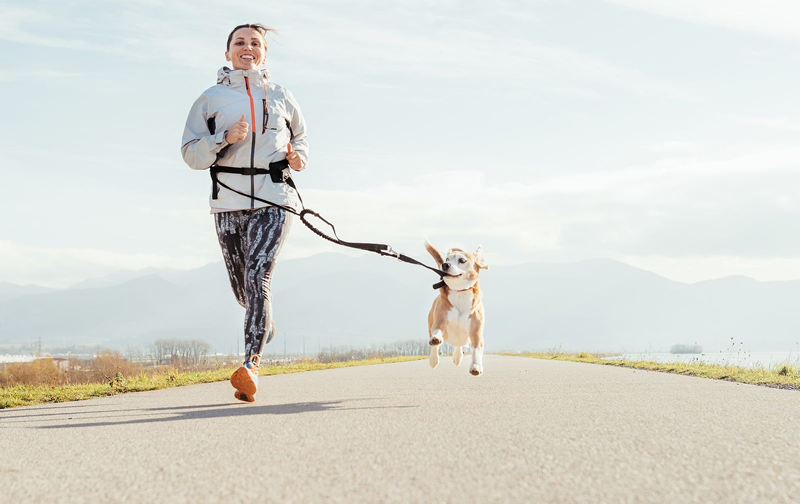 CaniCross is the sport of cross country running with dogs. The dog is attached to the runner’s waist with a bungee lead. It is powered, and whenever the runner’s feet are off the ground, the dog pulls the runner forward. The dog and the human form a team with the human as the driver, directing the dog from behind with voice commands. CaniCross is not only a great way to get human and canine fit but also works the dog’s mind as well as its body.

To successfully participate in CaniCross, your dog needs basic obedience skills. Start by teaching good lead manners during your walks. Once you and your dog are walking nicely together, start picking up the pace from a jog to a run. In addition, it’s helpful to teach your dog movement cues such as “speed up” or “slow down.”

As long as your dog is fit, healthy, of the right age and able to run, you can both take part in CaniCross. Always consult your vet if unsure.

The equipment needed for the dog is a comfortable fitting harness, which is suitable for running. A bungee line/lead and a waist/hip belt for the runner. 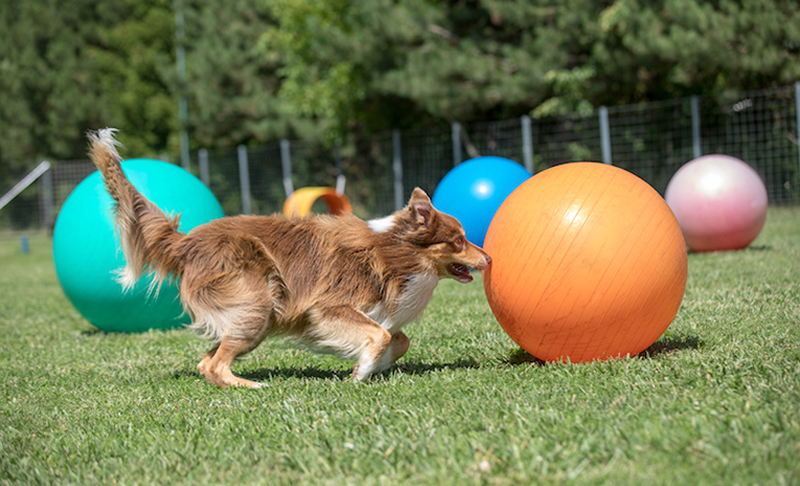 Treibball can be best described as urban herding. It is a competitive dog sport that requires teamwork between dogs and their handlers. Together, they must drive large exercise balls into the goal in a set amount of time. Handlers can only use whistles, hand signals, and verbal commands to provide direction to their dogs and play their part in the game.

The distance skills and verbal cues are similar to those used in agility, but with Treibball, there aren’t the same physical demands on the handler, and so people of any age and athletic ability can play. Basic skills needed are sit and down, touch an object with the nose, turn left and right and work reliably off lead.

Most popular with herding breeds, but any dog can take part whatever breed or size.

You will need fitness balls of varying sizes and colours, a kid-sized soccer goal, long line if your dog is unreliable off lead.

Here’s a great video to get you started:

What is Disc Dog? 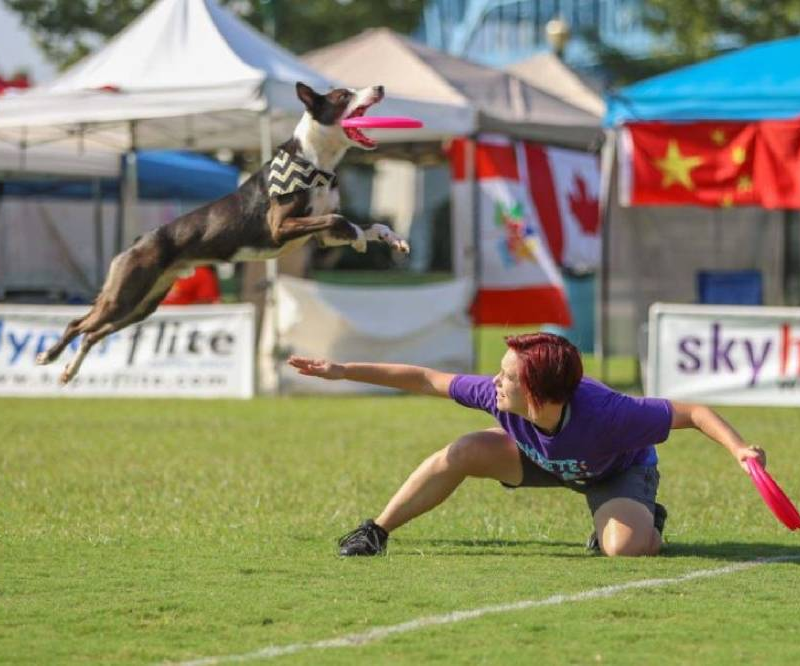 Disc dog takes a casual game of fetch with your dog to a different level. Dogs take part in the sport worldwide, and there are local clubs that organise meet-ups, training sessions and small competitions. In disc dog competitions, dogs and their human flying disc throwers compete in events such as distance catching and somewhat choreographed freestyle catching.

It will help if your dog already likes to play fetch, but it’s not a requirement. The most important thing is a good bond between human and dog. The sport celebrates this bond by allowing them to work together.

Dogs of all shapes and sizes. Check with a vet first if your dog has any fitness or lameness issues.

If none of these suit you or your canine, there are lots of other doggy sporting activities that may take your fancy and an excellent look book to get you both in the right frame of mind. 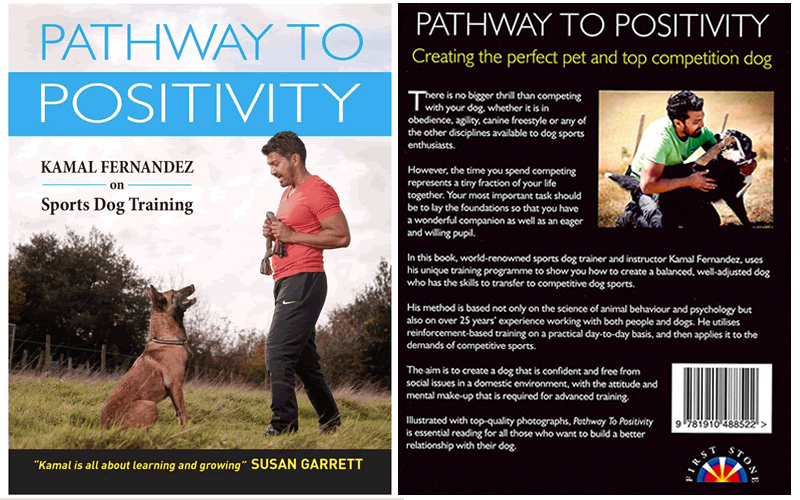 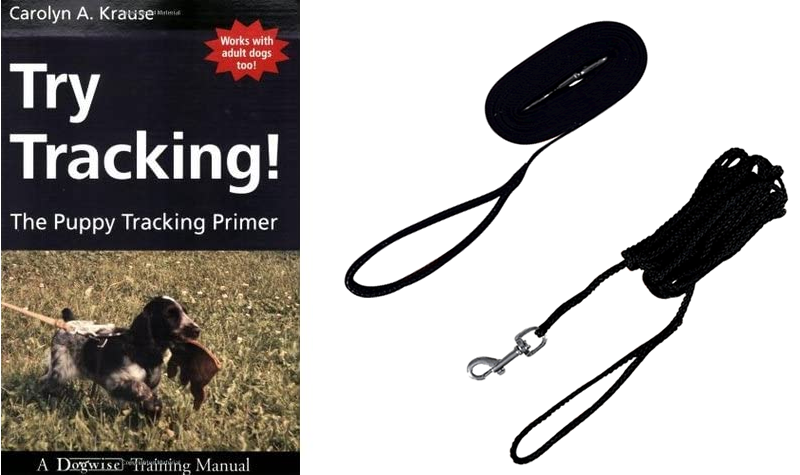 Heelwork to Music in the UK

There isn’t currently a UK Dog Puller Federation, so you could start your own! 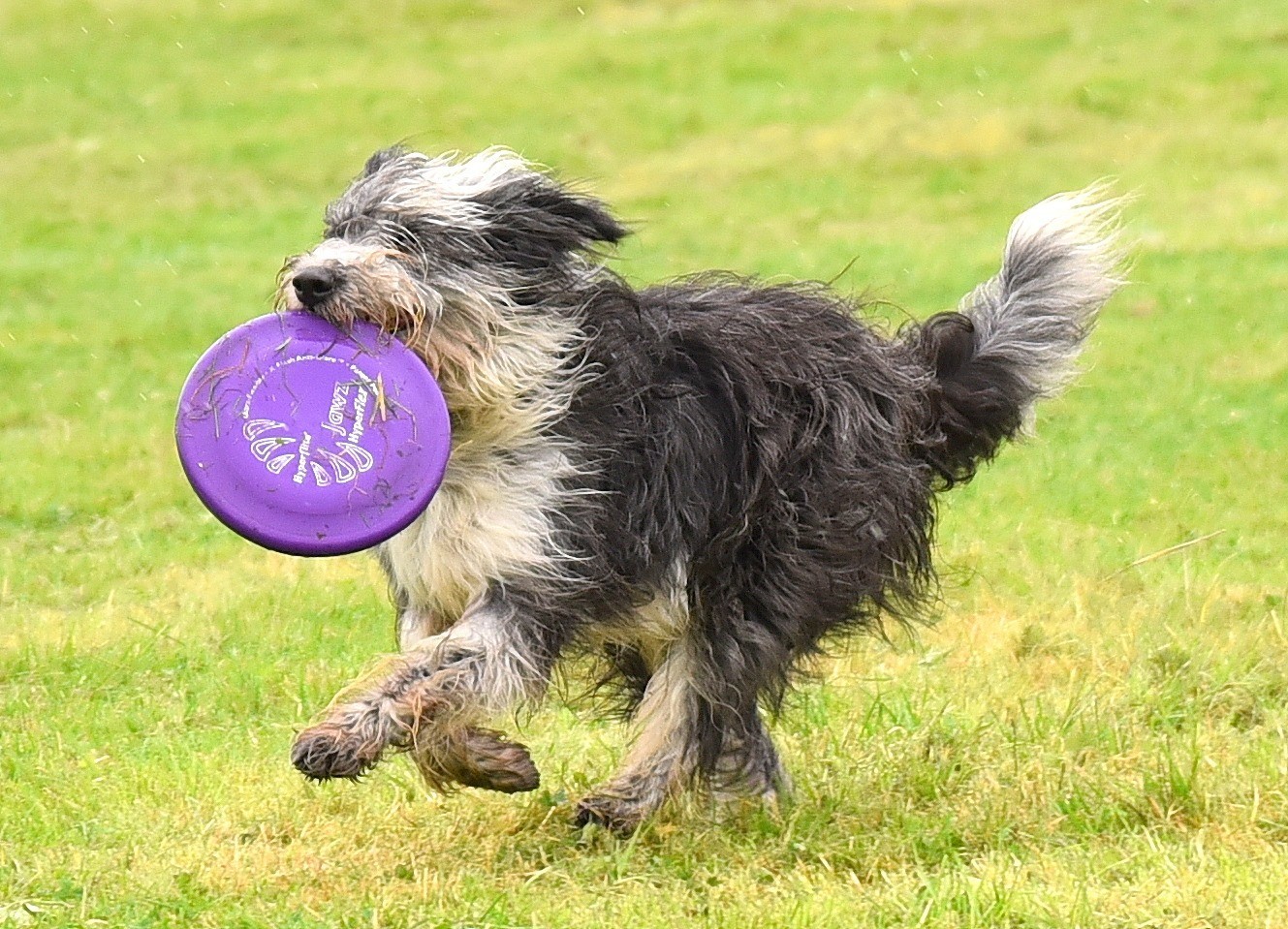 The weekend of 27th and 28th July, saw the advent of the first-ever Disc Dog Show in Scotland and what a resounding success it turned out to be. Despite the weather doing it’s utmost to dampen everyone’s spirits, a fantastic time was had by all. Dogs and owners alike.

You can see some of the highlights here and read the full show report below. If this doesn’t w(h)et your appetite for this fun dog sport, nothing will! 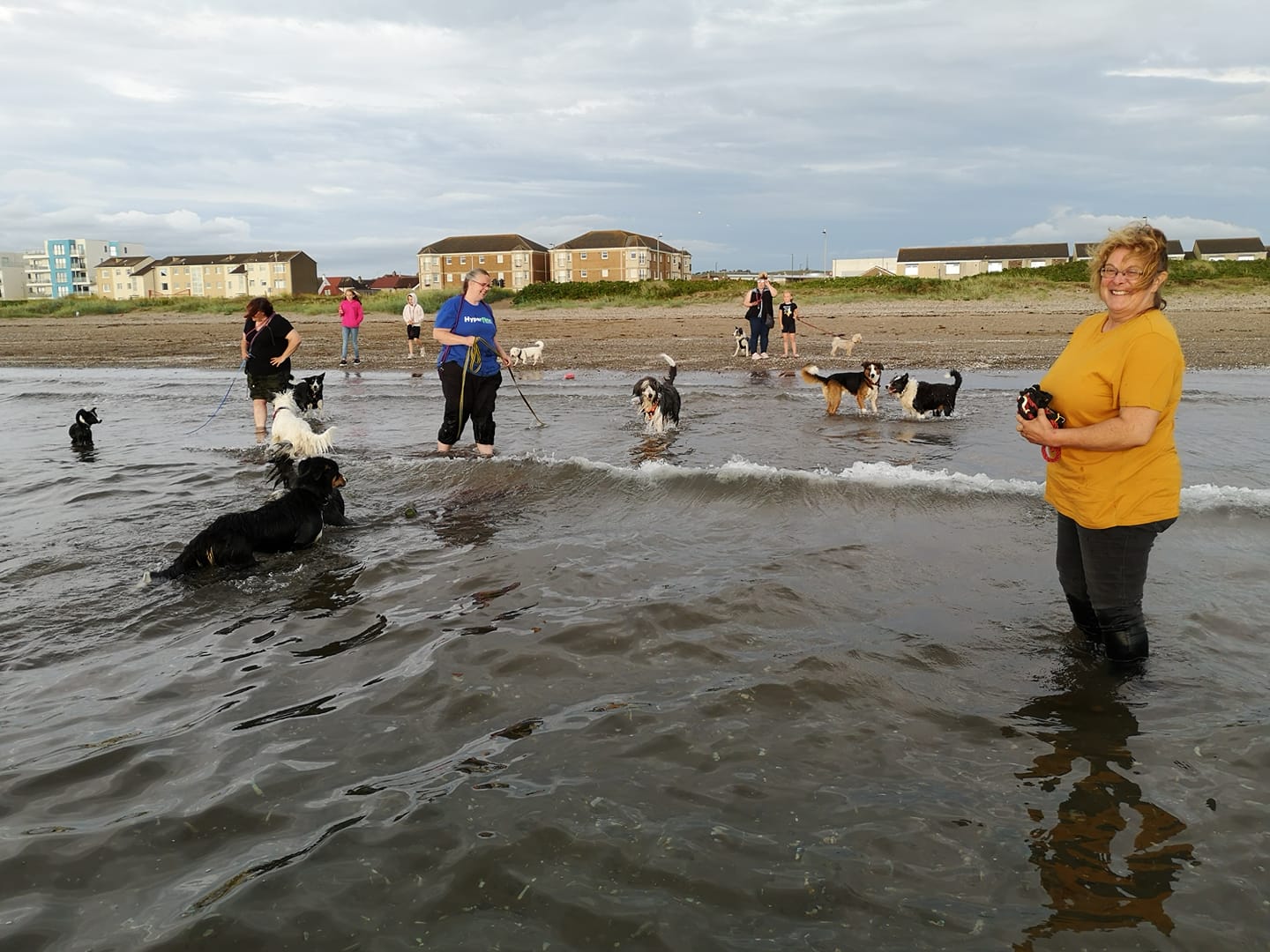 What an exciting weekend of Disc Dog Activities this first-ever Disc Dog Show in Scotland has been.

Many thanks to our sponsors – to Training Lines and Hyperflite, Fish 4 Dogs, Dorwest Herbs and to the wonderful Jean Steen who made so many super toys. 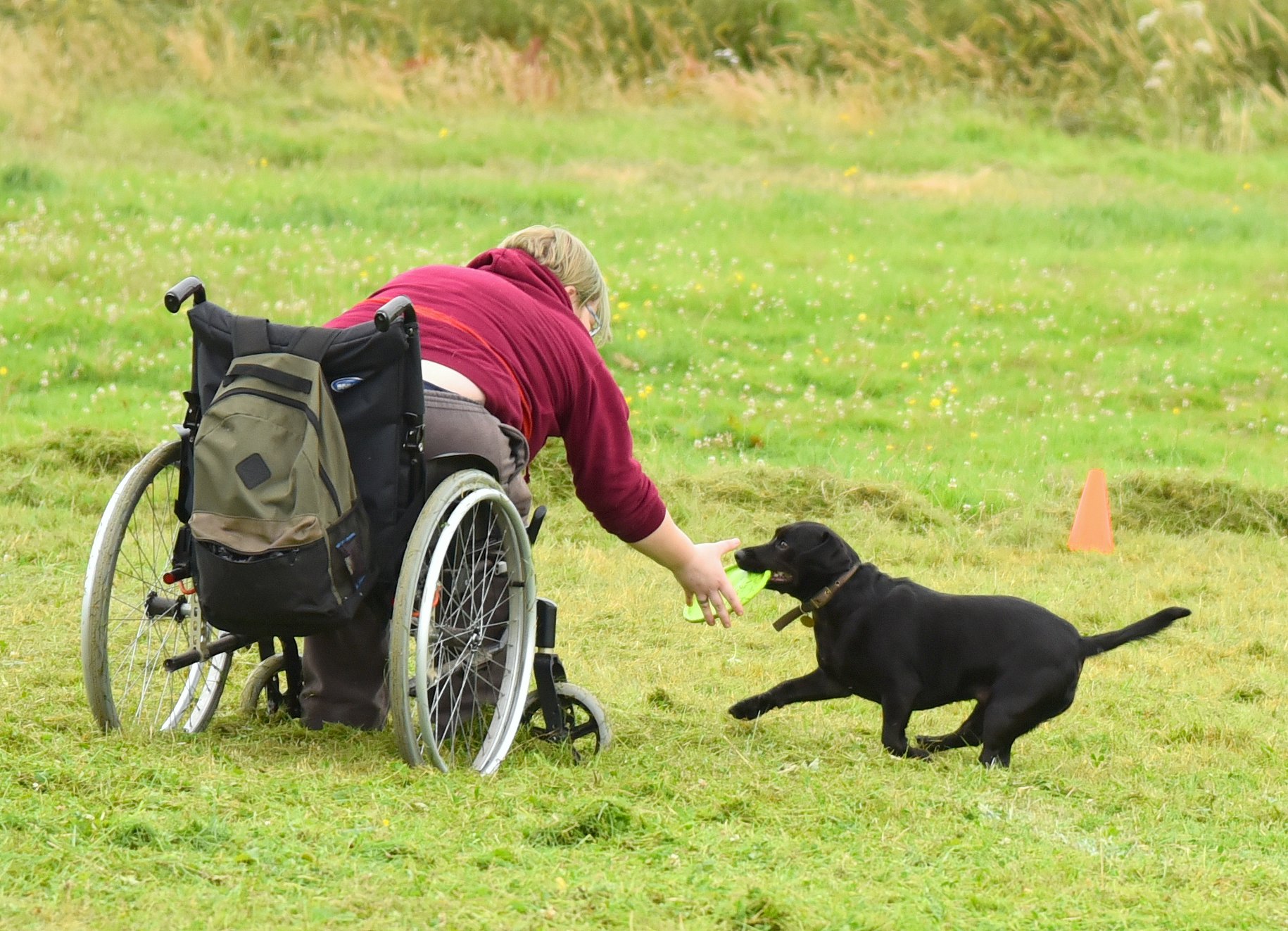 This was the largest class of the day and the standard was high with many of the competitors being new to the sport. The aim is to throw as far as possible on the marked-out pitch in order to maximize your points and you have a minute to do this.

This class opened the show and provided a lot of excitement with a three-way run off for 2nd, 3rd and 4th places which Susan and Lloyd won clearly, leaving Lori and Jackie to fight it out for 3rd and 4th place on a third run off.

The standard was high, and many good dogs sadly went without a place. 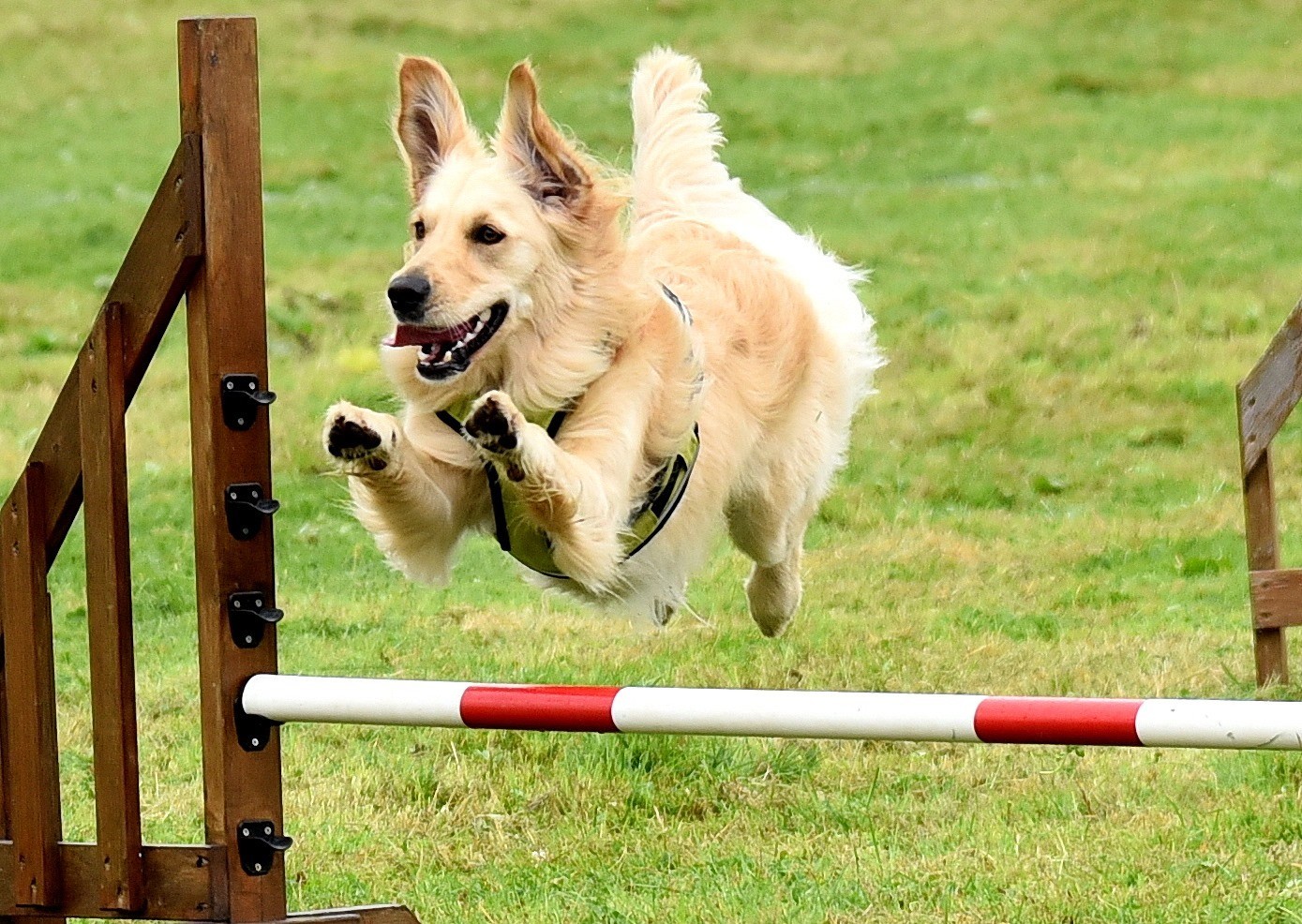 This class offered the opportunity to those who have agility experience to showcase a clear round over three jumps prior to catching a disc. The dogs had 90 seconds to complete as many clear rounds as possible which must include a disc catch per round.

Well done to Lori on having taken the top place with ease and after a run off taking the second place too. 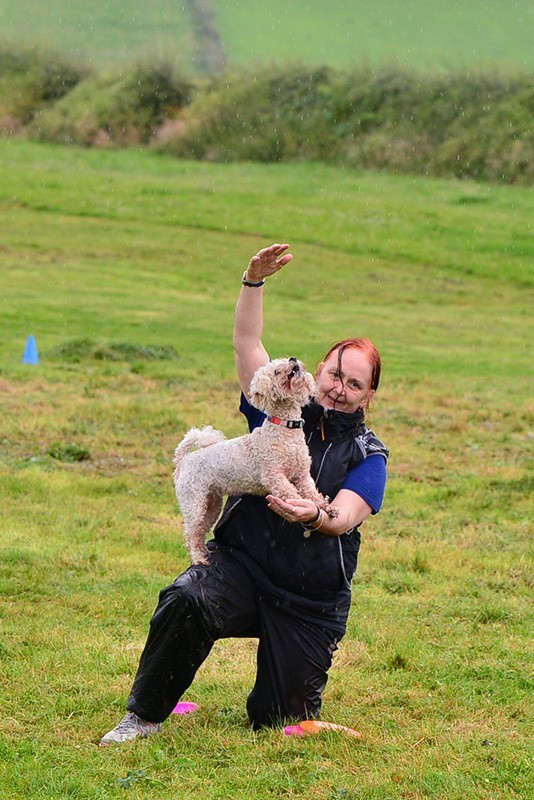 This class offered all the tricks and excitement which so many people associate with Disc Dog and it was my pleasure to judge this class alongside fellow Crufts Competitor and qualifier Penny Mansfield and Nicola Cameron of Kirk Dog Training Club.

The places were hotly contended and some of the scores throughout the class were very close. There was however a runaway winner.

What an athletic dog displaying drive and commitment. Such a variety of tricks and use of distances which showcased this dog’s ability to perfection. With a catch score of 50 and an audience appeal score of 13, this partnership was untouchable.

This routine was funny from the moment they started which was evident from the full 15 marks awarded for Audience Appeal. There was recognizable patterning in the throws which included a fabulous Round the world, there were jumps and an innovative fingerspin throw.

This new partnership is one to watch. I judged the Creativity section of this routine and it was stand out different as it had a lovely musicality which very much appealed to the Dog Dancer in me. There was a varied content and a high scoring 26 in the catch section.

Same handler with two different dog and well-chosen music reflecting the differences in these two dogs. Drizzle’s routine showcased varied distances and tricks. This little dog has so much more to offer she scored 22 very considered catches and an audience appeal of 12. Breeze suits her name as she is both athletic and fast. I liked the attention to detail in the jumps matching the lyrics of the music at the beginning of the routine. With a catch score of 23 and Audience appeal of 13 these two were inseparable. 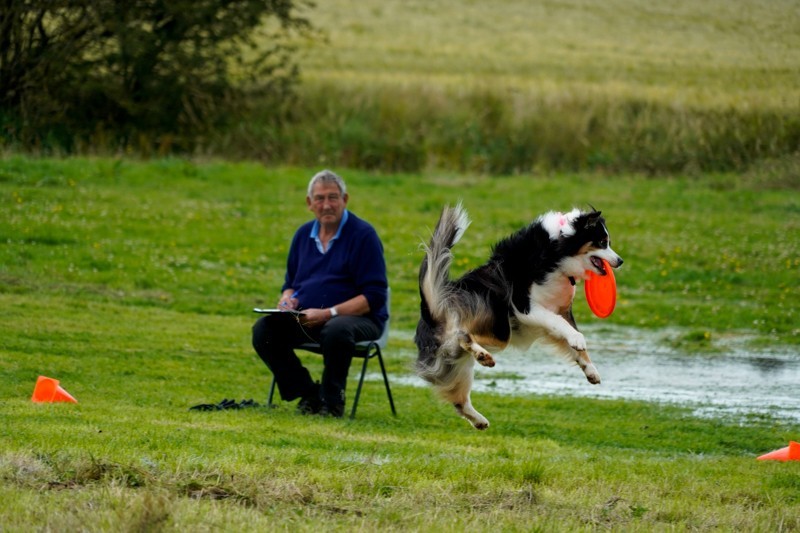 This class was held by kind permission of the UFO World Series and we are indebted to Chris Sexton for all the help and support we have been given.

This qualifier was held over two days with each dog having eight one-minute runs and the overall score deciding the winner.

The second day brought the challenge of windy conditions which seemed to vary with each run. But there were clear winners in the top three dogs which incidentally include two dogs from the same breeder and from repeat matings. These three dogs are now qualified for the European Championships in the Netherlands and the World Championships

Thank you to our judges Penny and John Mansfield for their hard work over the two days. 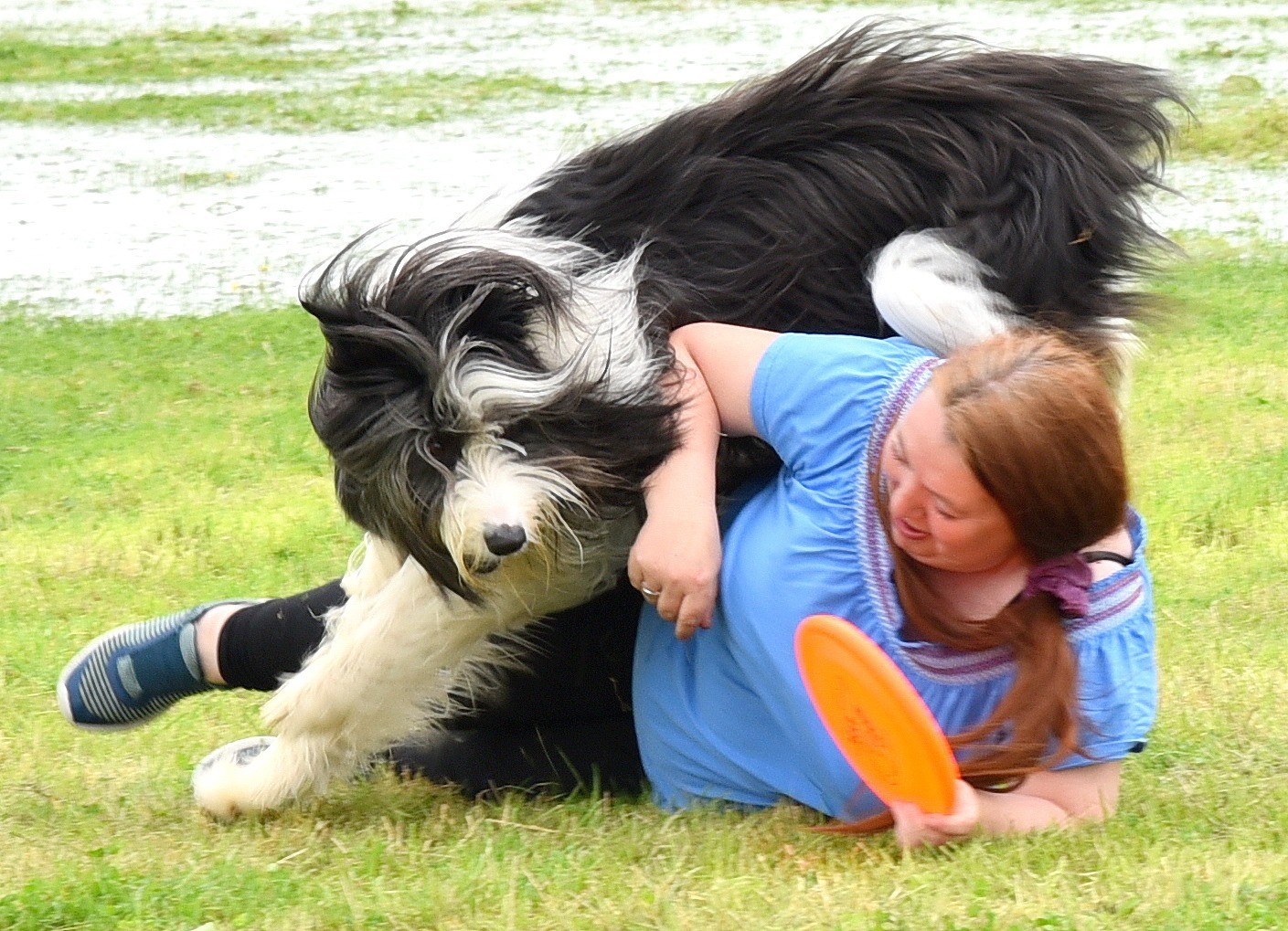 This class is judged on a variety of aspects and has a panel of judges who judge a category of their own and with the top three judges on the list also giving a comprehensive score on each routine.

Thank you to our judges –

Each partnership competed on both days and the top three partnerships are the qualifiers for the European and American Finals. 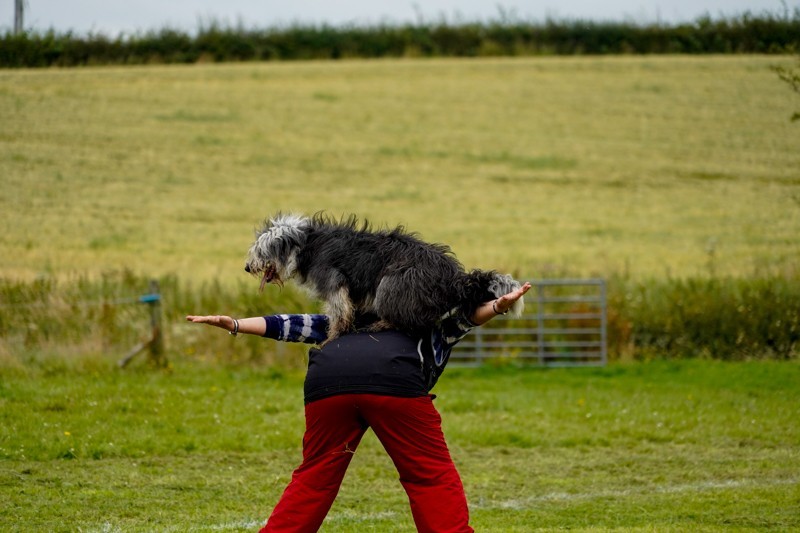 This class only attracted one entry but in the Throw Disc Nessie managed a respectable score of 5. This little dog is very athletic and keen. A valiant attempt at the Jump Disc, I am sure it will come with training and time.

As Scotland is about to take part in the Toss and Fetch Disc League, which is a worldwide event, the results here are very good news for the Flying Scots Team who took all top four places.

There were a few judges’ specials throughout this class with Awesome Flying awards going to Heather Smith’s Google and Sonya Ingledew’s Breeze.

Sunday brought a sunnier start to the day which was much appreciated since the Saturday evening Treiball competition had ended in a downpour of rain. Team events and pairs were very much the order of the day.

This was a hotly contested team event with the Bearded Collie Team of Team Captain, Jackie McLaughlan, alongside Marie Docherty, Michelle Porter and Heather Smith and their partners Brachen, Walter, Luna and Google Scoring 182.

The Anything but a Beardie team of Captain, Laura James with Casey, Nici Russell and Nessie, Susan Balshaw and Lloyd and Abby and Breeze making 150 points

It was the turn of the Anything but a Beardie team to take this class with Team Captain Laura with Golden Retriever Casey leading her team of Heather Davis and WSD Flossie, Abby and WSD Breeze, Sonya Ingledew and WSD Drizzle with 10 points to a narrow victory over the Beardies who scored 8.5 points.

Another victory for the Team of Bearded Collies Captained by Jackie McLaughlan and Brachen with Marie Docherty and Walter, Michelle Porter and Luna and Heather Smith and Google.

A huge well done to the runners up here of Team Captain Laura James and her Golden Retriever Casey, and Abby and Breeze, Susan Balshaw and Lloyd and Nici Russell and Nessie.

There were prizes for the best overall Team which was the Beardie Team and a round of good-humoured Disc Cheerleading!

The weather was very unkind to us as the rain started during this class. The Bearded Collie sisters were runaway winners with the second and third places being hotly contended.

Class 16 – Round the World Challenge

This fun class gave the dogs a lot of fun with the challenge of 90 seconds of drive, athleticism and disc catching.

This brought the Disc Show to a close for 2019. My thanks to all who helped set up for the show, and clear away in the torrential rain, a massive thanks to judges, timers, scorers, DJs and those who gave their time from other Dog Activities to judge in the UKDDA FreeDisc.

We are already looking forward to our 2020 show and hope you may come and join us either by entering or coming along to spectate. 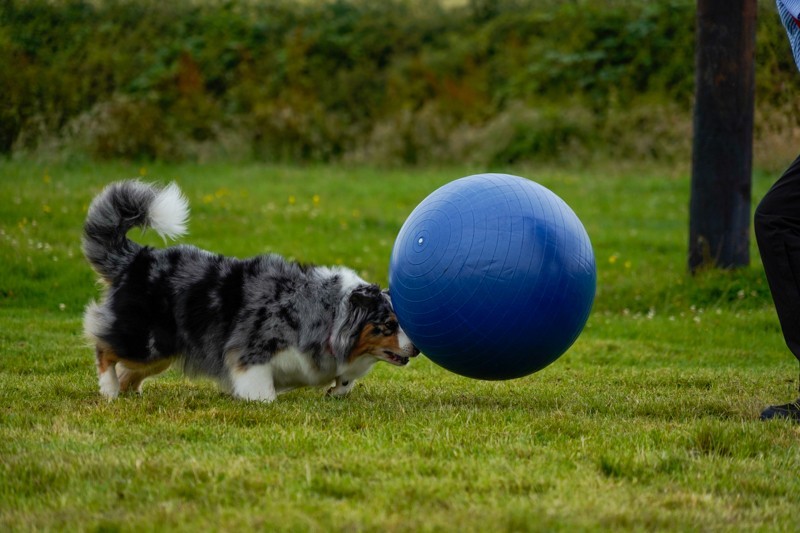 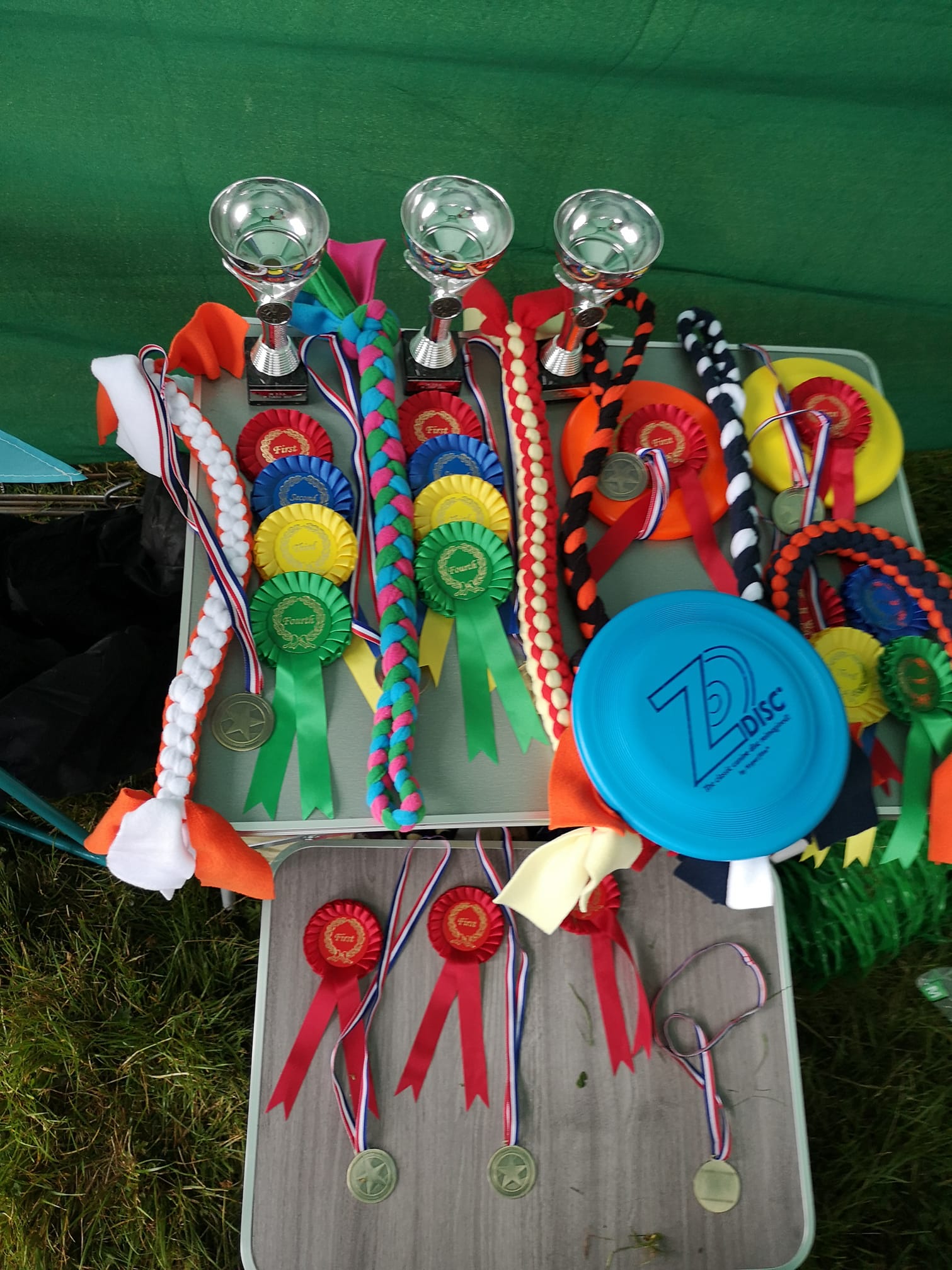 Train your Dogs with Heather Smith