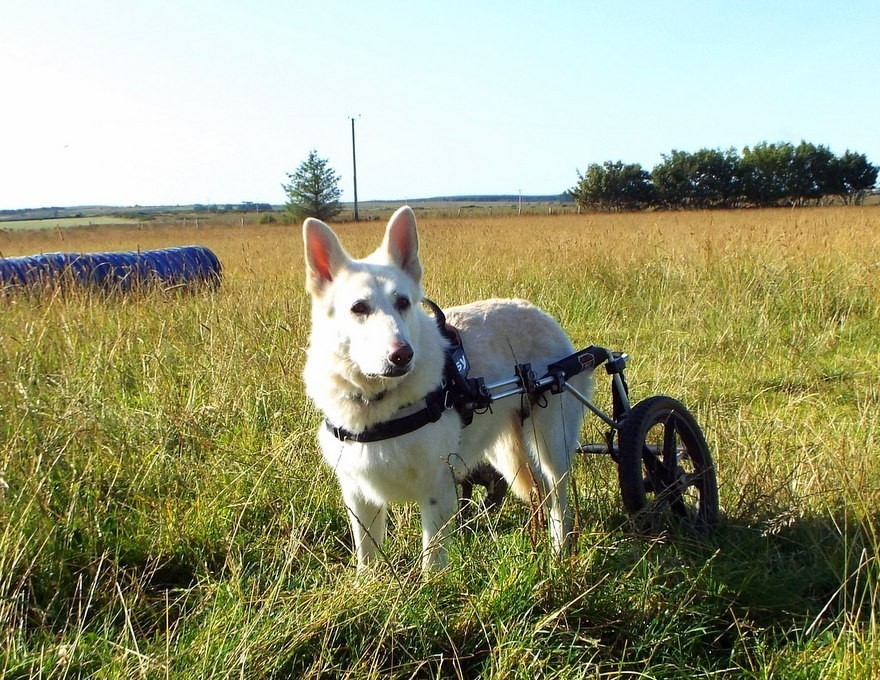 Daisy does a wheely…

Through plenty of exercise on the underwater treadmill, swimming, and puller sessions, we have managed to build up quite a bit of muscle in Daisy’s back legs. But unfortunately, it’s not enough to keep her mobile on all four paws as although her back legs are strong, she has little control over them. Thanks to her worsening CDRM she doesn’t have much idea of where her back legs are. We have tried Rock tape around her feet to attempt to increase awareness, but it’s a losing battle.

It is heartbreaking because her legs are far from paralysed they work perfectly, just not in the way they should. When she’s sleeping and dreaming about chasing rabbits, she moves her legs easily, and when she’s swimming, there’s no stopping them. Just walking on dry land seems to be the problem.

When she’s in the house, she tends to drag herself around using her front legs. Outside, once you get her up and in a straight line, she can break into a somewhat drunken little trot, swaying from side to side.

We had to face the fact that, despite all our efforts, she was only going to deteriorate. When we spotted some dog wheels for sale locally, we snapped them up.

We are determined to keep her independently mobile for as long as possible but need to be prepared for the inevitable. She’s only been in the cart a couple of times, and she was a little confused by it, but we believe when the time comes, she will adapt to her new circumstances and will love the freedom that the cart will give her. It will allow her to run freely, keeping up with the other dogs without falling over. Just the way she used to, only with a little help.