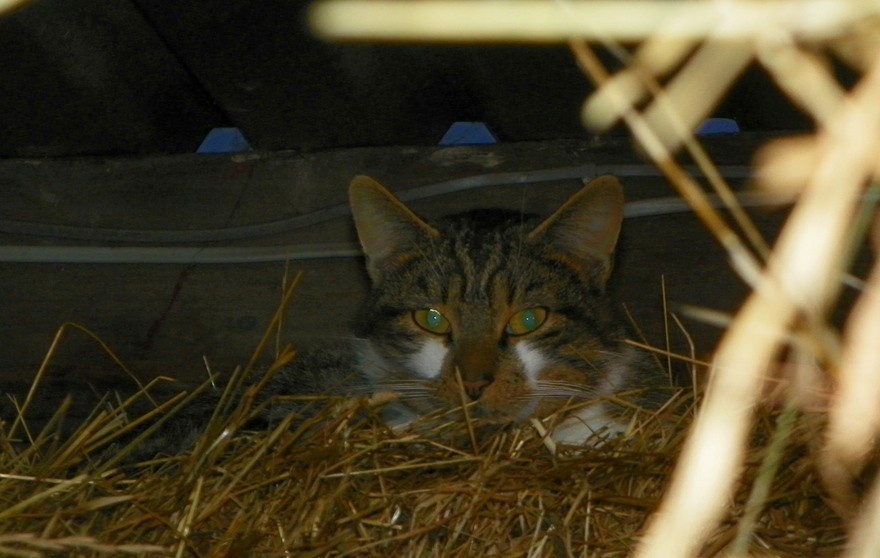 Yet another cat appears at the croft

Over the years we have had around 5 cats move in.  We don’t dislike cats, in fact we would welcome one into the home, but for the dogs.  Living in a rural environment, we are plagued with mice, so a nice mouser would be just the thing.

We have no idea where the cats have come from.  It could be that they have been dumped here (we once had a goose dumped in the yard too).  Or perhaps they drift here on their own, although we are quite a way from civilisation.

Some cats have disappeared after a while, whilst others we have captured and taken to a rescue.

The latest one turned up in October and has been living in the hay shed.  It doesn’t seem particularly friendly but it hasn’t hissed at us either.

Whilst milking the goats the other evening, we heard a huge kerfuffle coming from the chicken shed.  It was pitch black outside but their door was still open.  On investigation, we couldn’t see anything likely to be upsetting them.

A day or two later we went out to tuck them in for the night, and discovered the cat feasting on a dead chicken.  The chicken’s body was still warm, so either the cat appeared just as it died, or more likely, it killed the bird. Since then, our chicken numbers have been slowly decreasing.

Sadly, the cat will have to go.  We will entice it into a cage with some food and then take it to a local cat rescue, where they can find a more appropriate home for it.  Maybe somewhere it can get a chicken dinner served in a dish!