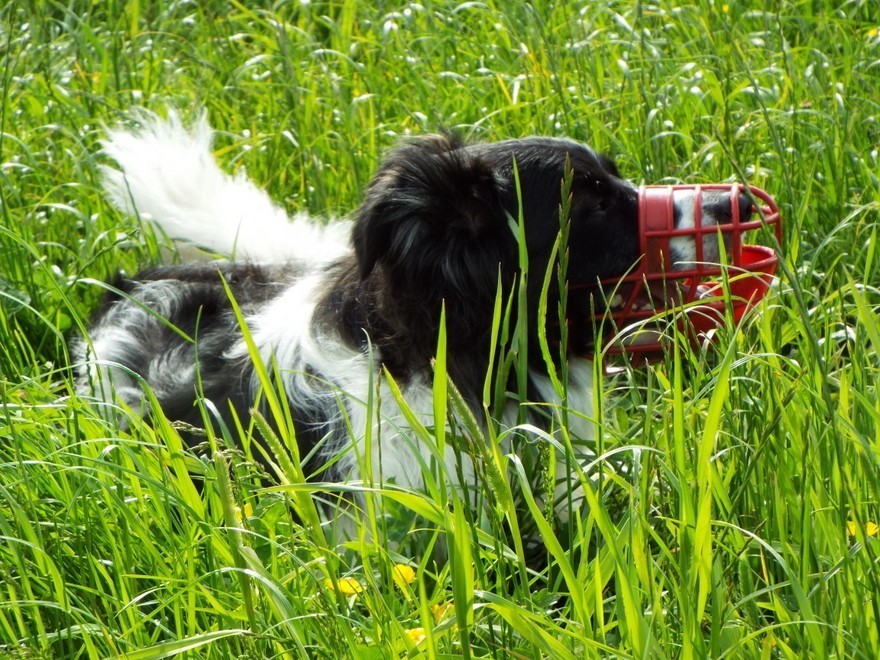 We are worried when Jack falls ill

Jack has always been a bit of a chewer and a scavenger.  He likes to pick things up and before you can tell him to “leave it”, it will disappear down his throat.  Back in August last year, he swallowed a piece of rubber ball and had to have surgery to remove it from his gut.  Not long after that he was poorly again and we rushed him straight to the vet for an x-ray.

We realised that we couldn’t keep this up so decided that the only way to prevent him “snacking” on his walks, was to put a muzzle on him.

He wasn’t keen at first but he quickly got used to it, and after a while he developed a technique that turned it into a useful scoop to get things into his mouth – like snow or sheep poo!  He was also very adept at using it as a weapon on the other two, Daisy and Archie.  We called it his “warhead”!

After several months without incident we thought we would try him without it, as we really didn’t enjoy making him wear it, even if ultimately for his own good.

A couple of weeks of freedom later and he had severe diarrhoea.

We starved him for 24 hours then fed him cooked chicken and rice for a couple of days, but it made no difference and we were off to see the vet.

His temperature was on the high side of normal so the vet gave him something to get his gut working, a wormer, and suggested we carried on with the bland diet.

Over the weekend he didn’t improve at all so we took him back on Monday morning where he got a steroid injection and had blood tests.  We also had to provide a faecal sample.

Still no improvement, we were heading towards another x-ray but decided to wait for the test results.  In the meantime he had a course of steroid tablets to make him more comfortable and we were cooking him fish, chicken and rice every day.

All the test results were negative, we couldn’t find the cause of his ailment, so the vet put it down to colitis.

Just as we were at the end of our tether, he finally began to improve and is now back to his normal self, but with the muzzle reinstated!