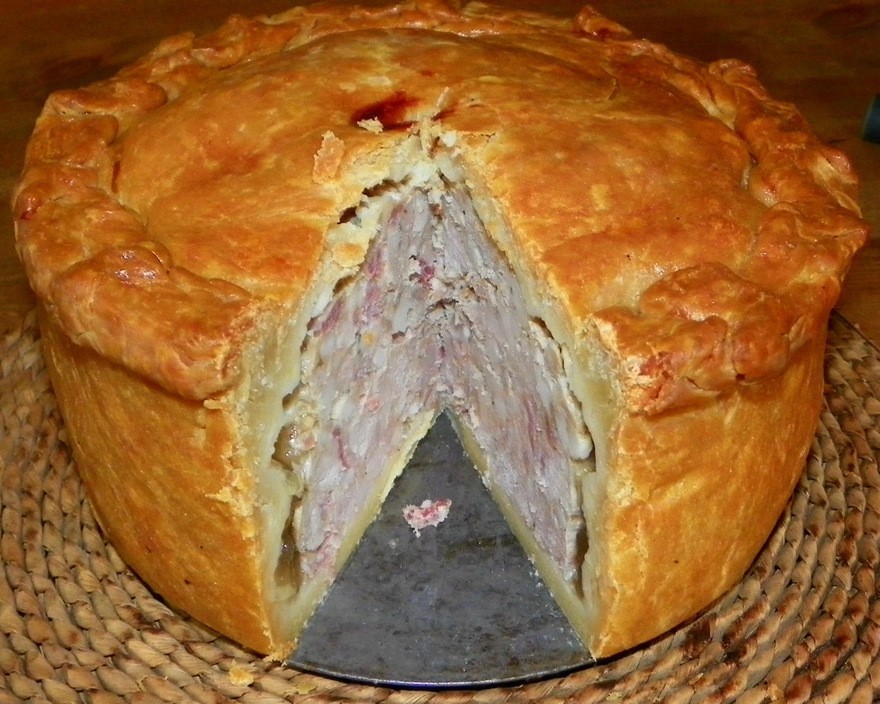 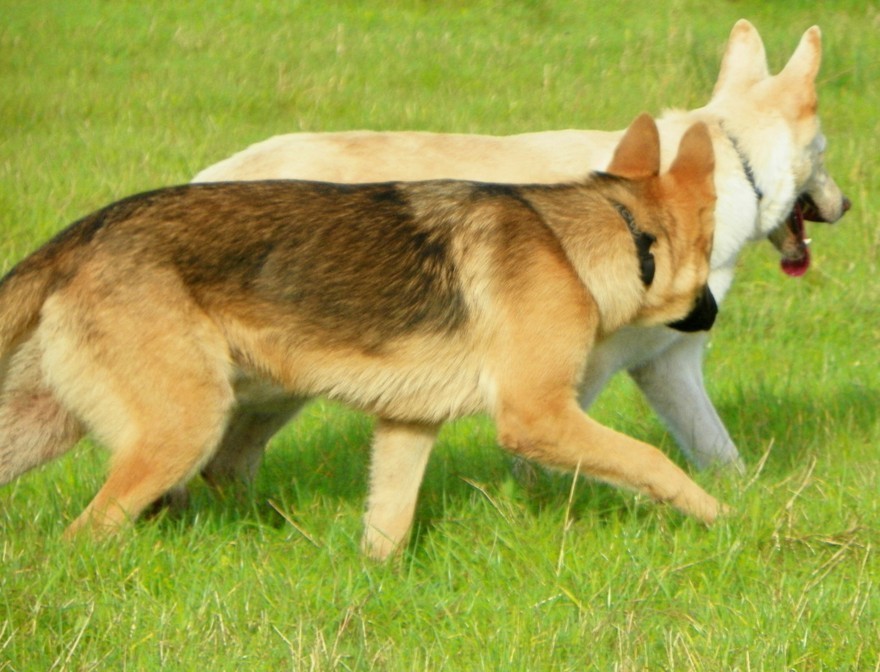 Thankfully Daisy is now completely recovered and back to playing frisbee and her shepherding duties which she carries out with a little too much enthusiasm sometimes.

Archie, who despite his bad start in life with stomach problems and itchy skin, has blossomed into a beautiful boy and he is pleased to have his playmate back.  He copies everything she does, good and bad!

Around the croft we are waiting to see if one of our goats is in kid, we are hoping for third time lucky.  In previous years she hasn’t taken, even though she has had several suitors.  We have dabbled in butter making and have various fruit wines bubbling away all over the kitchen.

This sudden hot spell has taken us by surprise; we were just about ready to break out the thermals again and were bracing ourselves for the winter to come. 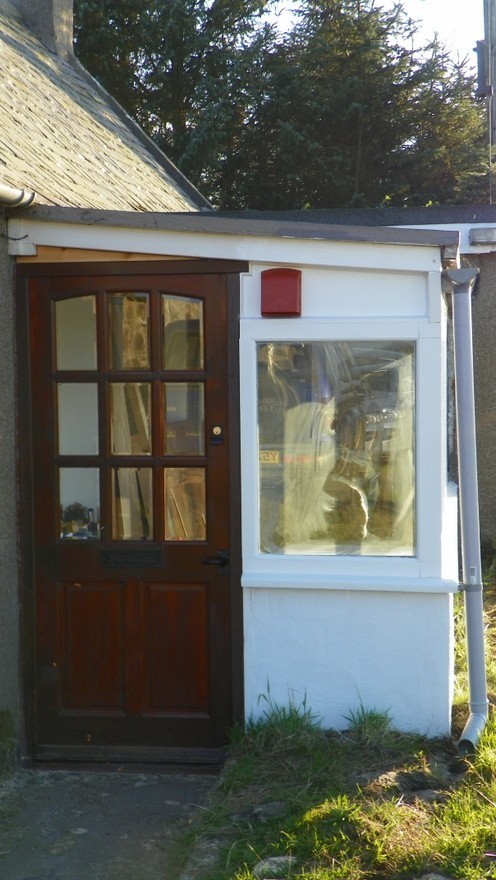 A disappointing hay harvest, an operation for Daisy and a good looking porch

August has been pretty manic.  As well as working on the new Training Lines website we have had the hay to worry about.

As usual the weather has been awful but after studying the forecast for weeks we took a chance and cut the grass.  Of course it rained a lot afterwards but one morning we woke up to a hot dry day and decided to bale.

In the past we have had as many as 428 bales from our field.  This year we managed a paltry 89.  We shall have to buy some in to see us through the winter months.

With Archie maturing rapidly we decided we couldn’t put it off any longer and so Daisy was spayed.  She was a terrible patient and we couldn’t leave her alone for a minute.  Then just as we thought the worst was over, the stitches were out and she was getting back to her normal self, we discovered her wound had opened and she needed to be stapled back together.  Another week of monitoring her every move followed.

However, we have found an odd few hours here and there to work on the two porches and the larger of the two is now almost complete, just a few finishing touches left to be done and we’ll have ourselves a fantastic new room. 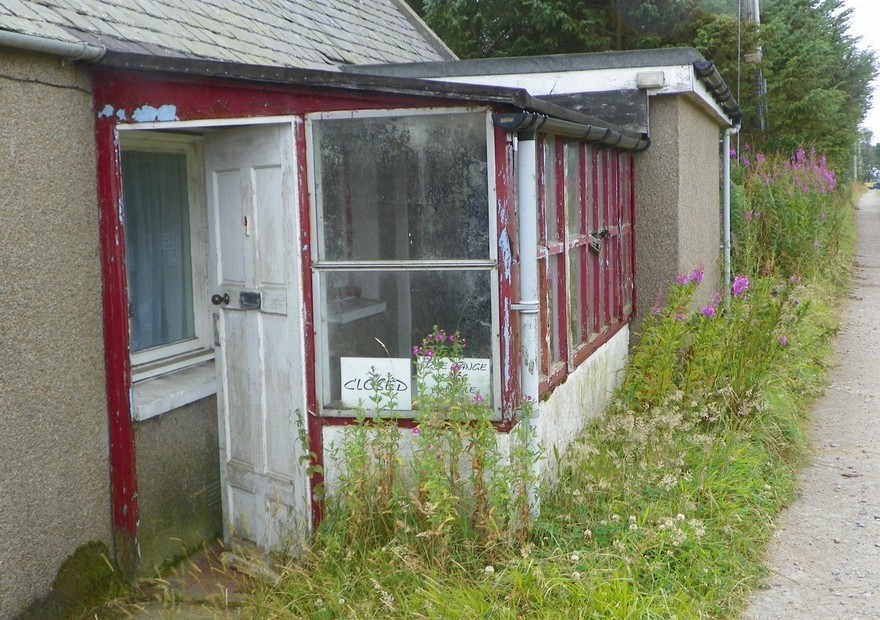 We tackle our dilapidated porch

Since we have lived at the Croft we have devoted most of our spare time to the outside and the animals.  When it comes to the house itself we have been sadly lacking.

Our broken down old porch that was in daily use for the collection of the post, and the sale of our free range eggs, was truly on its last legs.

We didn’t have the time or the enthusiasm to start the project but luckily for us we had family that were keen to help.

At the end of July we spent 10 days knocking it down and rebuilding it.  Not only that but we have to confess that we had another porch in a similar condition and that one was also tackled.

They are not complete yet so check back in August for the “after” picture. 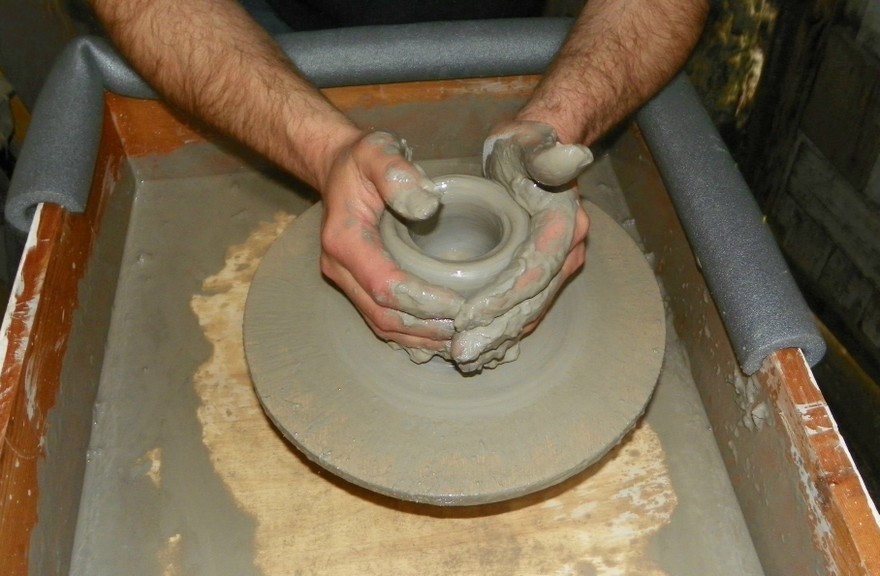 Things are growing. The fruit bushes are doing well, and potatoes and other vegetables are starting to look very good, and weeds are doing the best of all!

Unfortunately our strimmer was a little worse for wear at the beginning of the season, which meant that nettles and other nasties managed to get a bit of a head start. More than a head start in fact, but after enough new parts to equip a small shop, the strimmer now seems to be doing OK. That’s why we know the fruit bushes are doing OK – we can actually see them now…

Indoors, we haven’t had a great deal of time to ourselves, but we did manage to build a small potters wheel from odds and ends. It isn’t the smoothest piece of machinery you’ve ever seen, but it just about works. 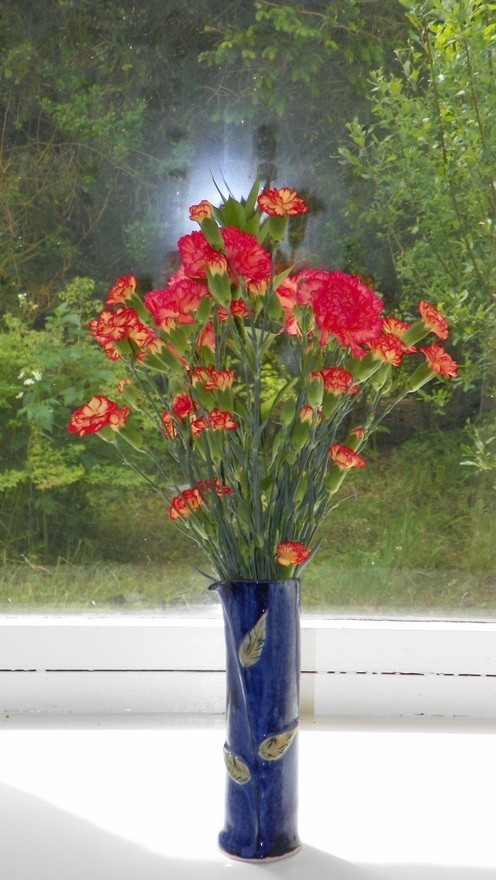 We take up an exciting new hobby

At last, we have started our latest practical hobby: Pottery.

We’ve had our name down for a local class for ages, and finally this month we ‘got the call’ and our first sortie into the world of pottery has begun!

Our aim is to be able to make practical items to enhance our life at the croft, but we couldn’t resist this slim blue vase – the first item to be fired and glazed so far.

Plenty more work on the wheel we hope – great fun, and the opportunity to paint ourselves with flying wet clay! At least, that’s our experience so far… 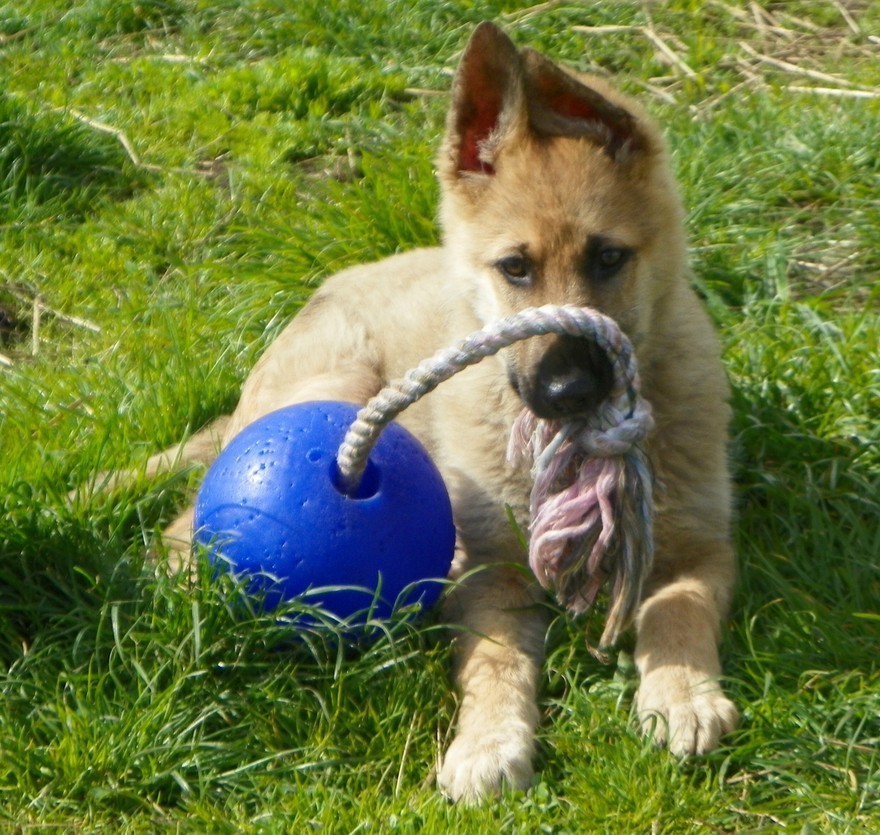 We welcome a new addition 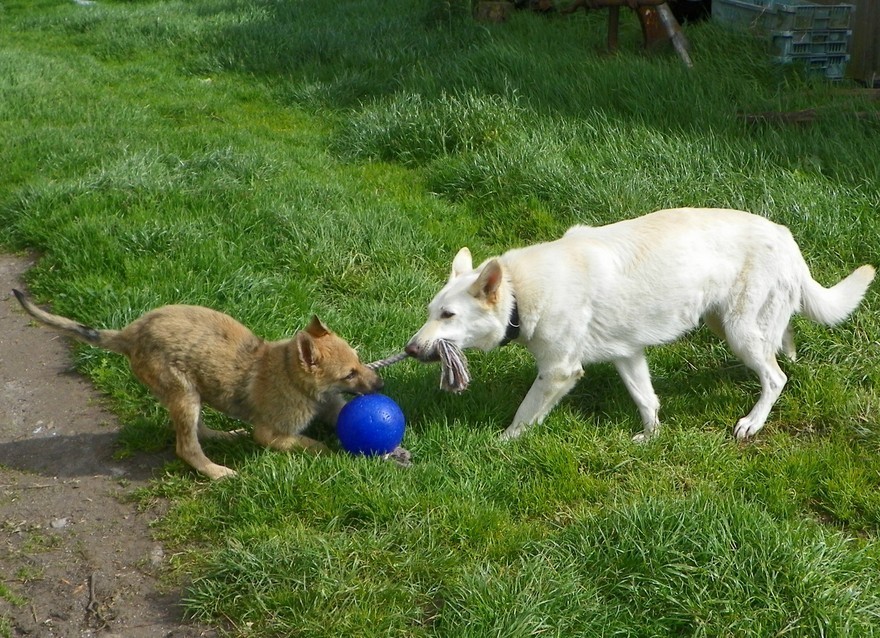 We are obviously gluttons for punishment, and recently acquired Archie our GSD pup.

At 8-9 weeks old he is a real live wire, and is having a great deal of fun antagonising Fin and Daisy with his antics (and sharp teeth!). Not least of which is hanging on to one end of their Romp n Roll toy while they try to carry the other end! Light hearted fun, with a bit of noise thrown in…

Apart from the odd mishap, he has fitted in really well and has been socialised brilliantly by the breeder. We have been keeping up the good work by making sure he meets the postman every day, and delivery drivers when possible, and he is also enrolled in some local training classes. We do most of the training ourselves at home, but it is extremely useful for him to meet lots of other dogs and people. 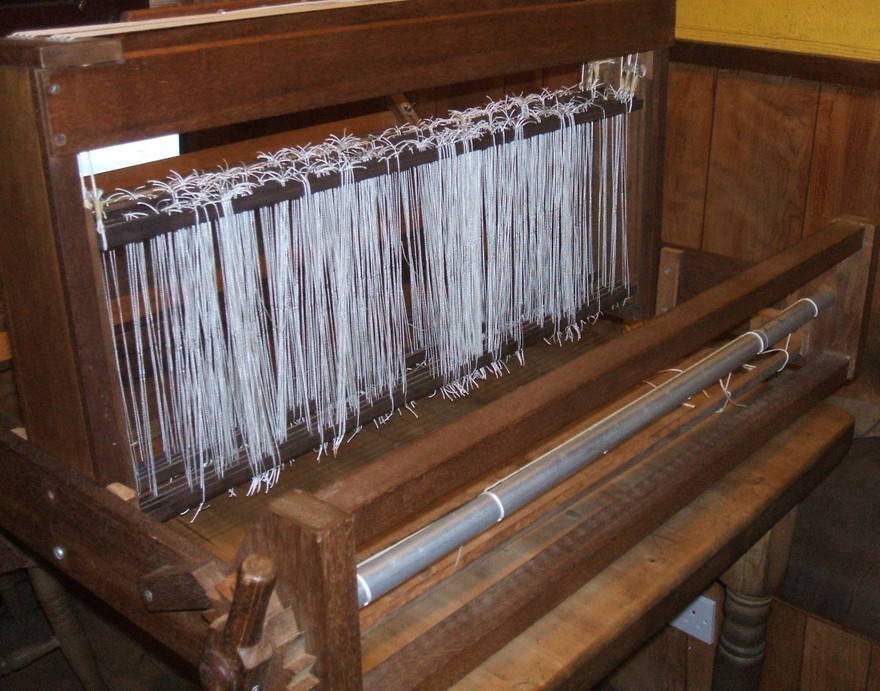 Just recently we were fortunate enough to secure a table loom from a friend of ours that no longer uses it. It seems quite big, with lots of levers and winding bits, and we haven’t got a clue how it works!

Once lambing is over and we can start sleeping at night again, we should be able to stay awake long enough to do some research on it.

The lambing itself has been hard work, but very rewarding nonetheless. We’re half way there at the moment, and looking forward to the end. With only six ewes, you might wonder what all the fuss is about, but six or sixty, you still don’t know when the lambing will actually take place and we prefer to keep an eye on them if we can. We actually think that some of the ewes hold there lambs in so they can enjoy their hotel-like accommodation for as long as possible…

Still, if we want to have some wool for our new loom, we do need to put some effort in now! 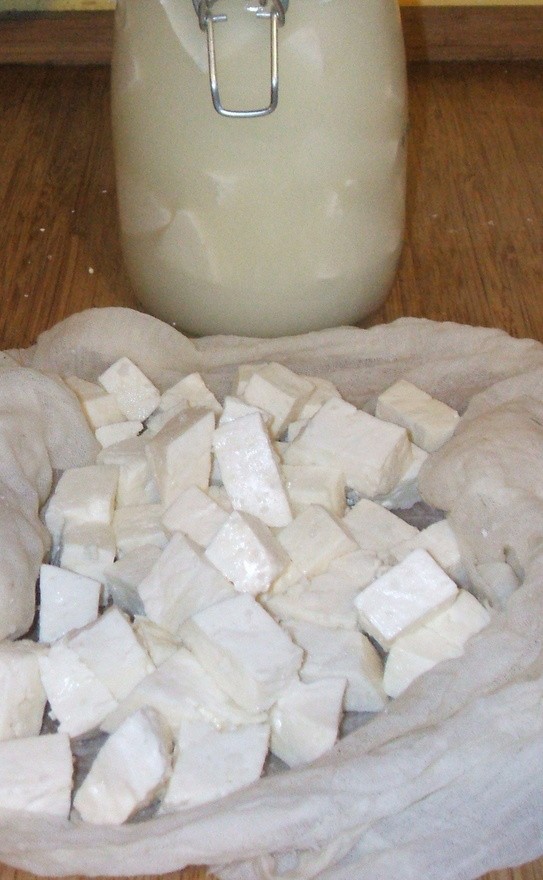 Learning to make our own cheese

Since we weaned Albert the calf from our goat, we have been milking said goat twice a day every day.

Subsequently it has been some time since we’ve bought milk, and more recently we have ventured into the exciting world of cheesemaking! Our cheese press, fashioned from some scrap wood and other bits and pieces welded together, is ideal for hard cheeses, and we have some nice looking Dunlop (a traditional Scottish cheese) and Cheddar on the go. Unfortunately it will be quite a while before we know if they have been successful as they take time to mature.

On the other hand, soft cheeses are ready a little sooner. One of our latest is Feta, which is stored in brine (pictured). Delicious!

We also hope our other goat is in kid, although it’s very near to the end of the mating season and we probably won’t know for some time if she’s pregnant. If we’re lucky, we could double our production of milk! 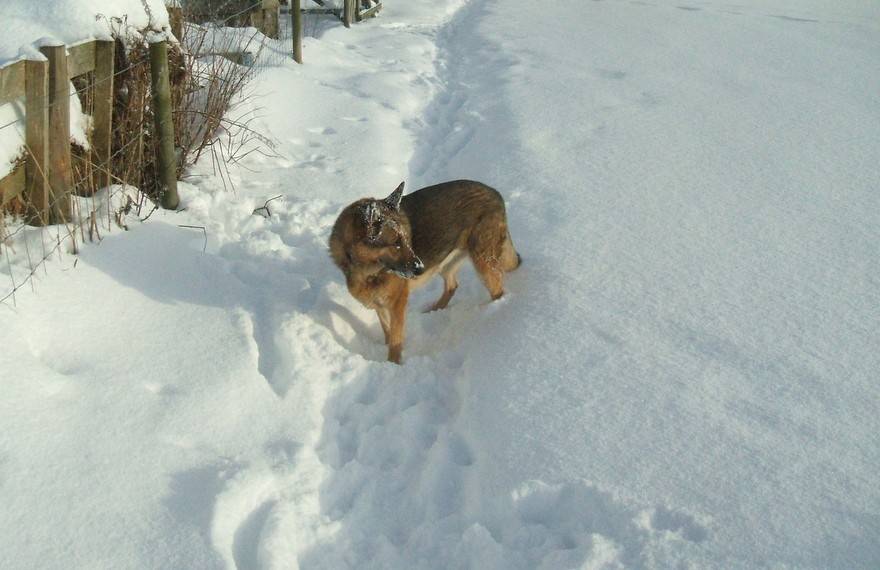 We lose our beautiful girl

2011 didn’t start off too well for us, with the tragic loss of our lovely GSD Sophie. She was a truly wonderful dog who joined us with her sister Amy over 10 years ago, and she was the matriarch of our pack.

Although getting older she was generally pretty healthy, but one day on a walk around the field she just lay down and seemed very cold. We brought her in to warm her up and she did rally, but the following day she collapsed in the kitchen. Wrapped in a blanket while we comforted her, she died in our arms. Quite typical of her to spare us from long term worry, and difficult decisions.

She will be sorely missed, not least for those defiant barks she used to deliver while looking us in the eye and ignoring our pleas for quiet!