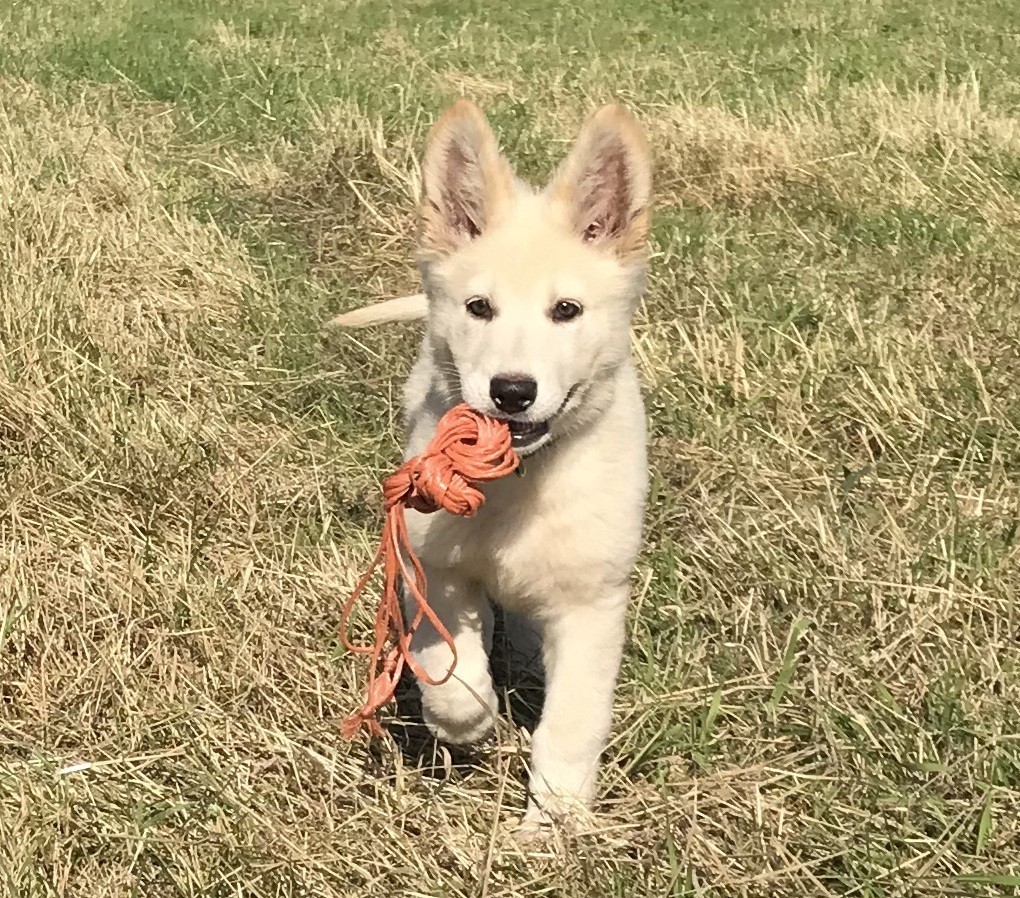 Rosie, helping with the baling

We had met her before, three weeks earlier. She was a bold little pup with her mum and dad to back her up, but when we came to collect her, she was very timid and quite nervous. We scooped her up and loaded her in the car, in the crate that had been painstakingly prepared for her. Sadly, she didn’t make it the few miles home without bringing up her breakfast. 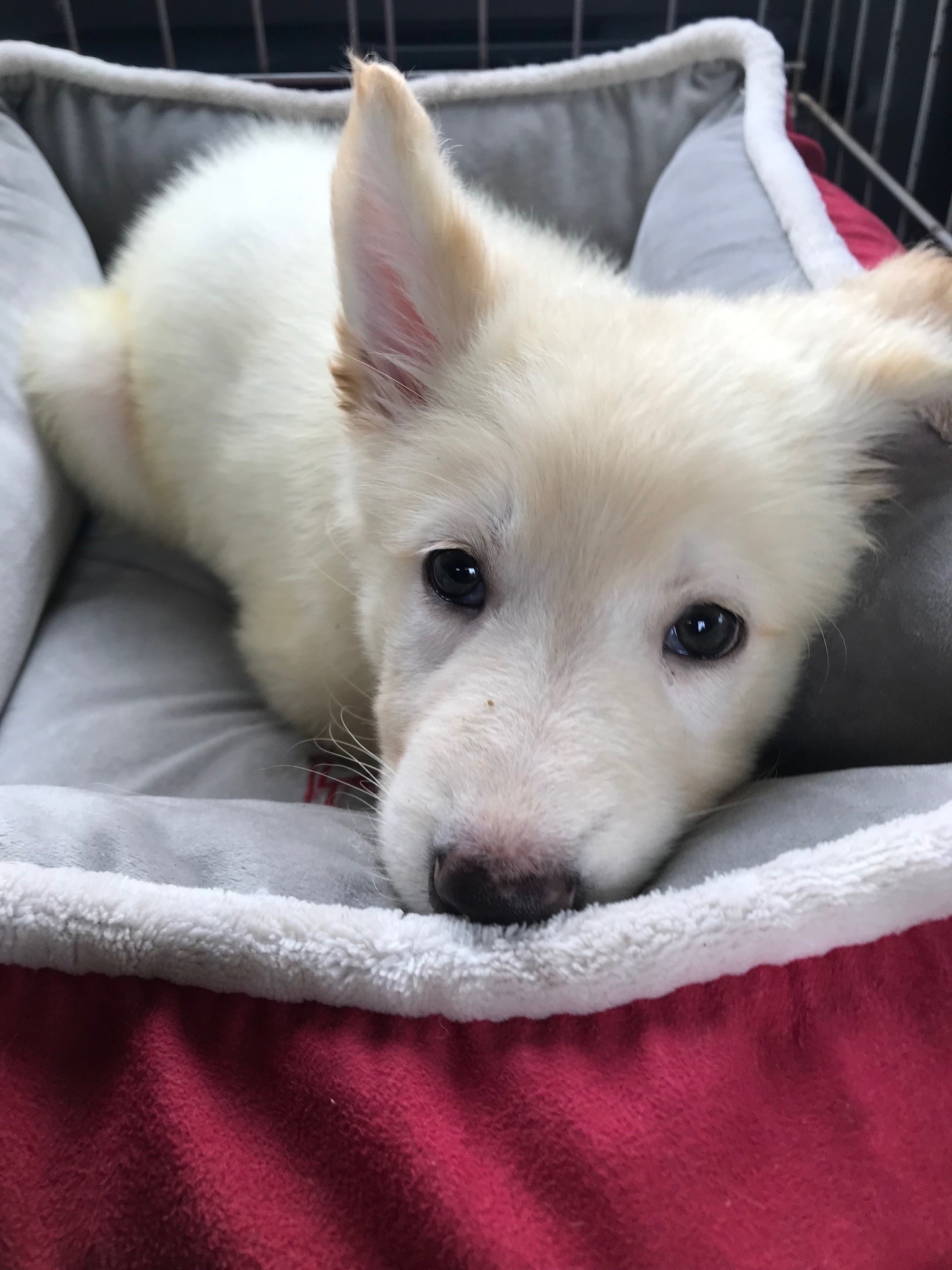 Rosie on her way home

Introducing her to the others

Now it was our turn to be nervous! Both Jack and Archie had welcomed a few pups in their time, so we weren’t too bothered about them. Toby’s only pup experience was with Tilly; he was a bit snappy with her until he got to know her. Tilly had no pup experience, and her eyes stood out on stalks on her first sighting!

We were cautious with all the introductions and are still vigilant now. We don’t ever leave them completely alone together. 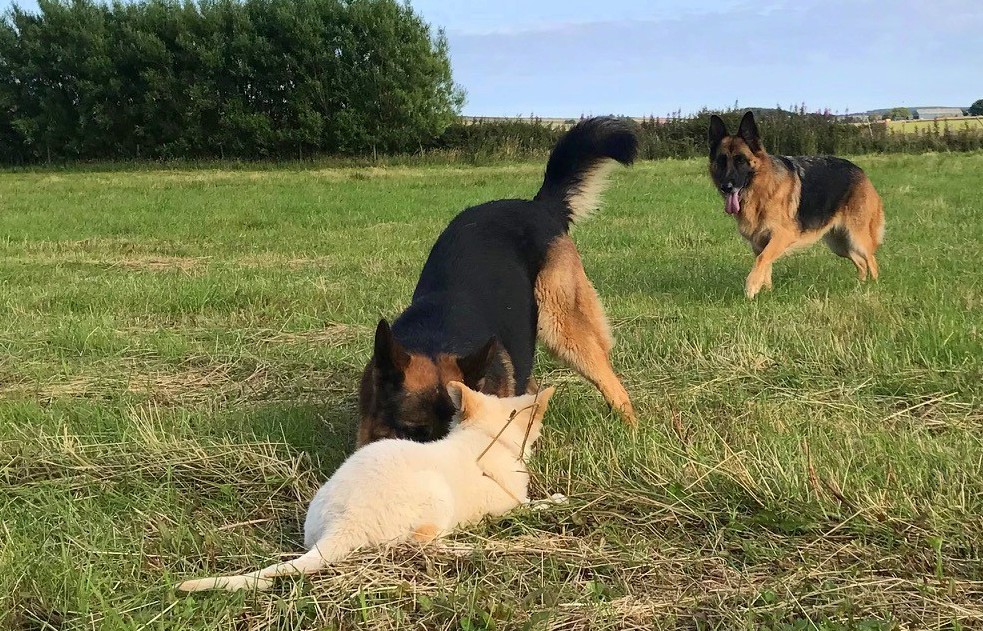 Toby does love to play

She loves them and is determined to join in with their games, but we are aware of the huge difference in sizes and so take the utmost care to ensure she’s properly supervised, as once the small puppy teeth start snapping, things can get a bit wild. At that point, she goes into her crate for some time out.

We had initially decided to call her Lily. However, after a confusing few days of Tilly and Lily, we saw the error of our ways and renamed her Rosie!

On the second day, at around six in the evening, we noticed that her eyes were swollen almost shut. We guessed that she had suffered an allergic reaction but to what? Was it our grass, her food, or had she been stung? After bathing her eyes, we decided we should speak to a vet to be on the safe side. Within the hour, we were at the surgery. By that time, the swelling had gone and she was practically back to normal. While we were there, the vet checked her thoroughly and recommended we gave her half an antihistamine tablet.

The following day her ears were puffy and red, so she had another half tablet and was fine. Since that time, we have had no more allergic reactions, thank goodness.

All toys had to be thoroughly examined and any squeakers surgically removed – all toys seem to have squeakers these days – so as not to upset Toby. We found the soft treat dispensing toys were the most popular and useful, especially the Lotus Ball. We also ensured we always had some sort of toy near to hand so that when she started biting with those sharp puppy teeth, we had something to divert her attention and protect our limbs!

She enjoys slurping lots of water, so we introduced her to the Chilly Penguin.

Music by:  Music Unlimited Hip-Hop Is

In the evenings, after a busy day, the dogs all like to chill out while we watch TV. Rosie, of course, hasn’t quite got the hang of that yet and thinks it’s a great time to wind everybody up.

We have found the Sniffing Carpet for smaller pets is perfect for her. By the time she has finished foraging for the treats, she is ready to lay down and relax.

Each night we fill treat dispensing toys and put them in her crate. She literally skips towards the crate at bedtime and has been known to sit outside impatiently howling to get in! 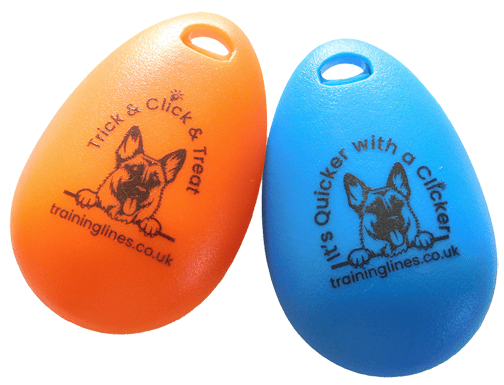 It really is quicker with a clicker!

We waited a week before we started clicker training. As we had changed Rosie’s diet, we wanted to give her a chance to get accustomed to the new food before we started feeding her lots of treats. Tuning her into the clicker was easy since she is very food oriented. We spent one day on that and the following day started training properly.

The first thing we taught her was eye contact. Called her name, which she barely knew at that point, and when she looked at us, clicked and treated.

The sit followed, and then down. All of which were straightforward and learned in minutes.

She has now learned settle on an old car mat, and it literally took three attempts for her to get the hang of it.

She is so enthusiastic when it comes to clicker training and initiates the training herself. 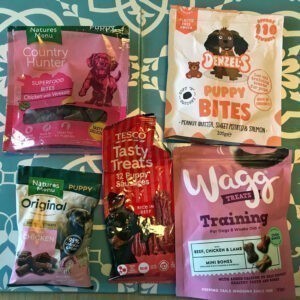 We used a variety of treats, all especially recommended for puppies. The only problem was the size of them.

For clicker training, you need small, tasty treats that can be quickly eaten so you can treat and move on.

All of the puppy treats had to be chopped into tiny pieces for her initial training. Now she is having slightly larger pieces.

Rosie loved them all and was happy to work for any of them! 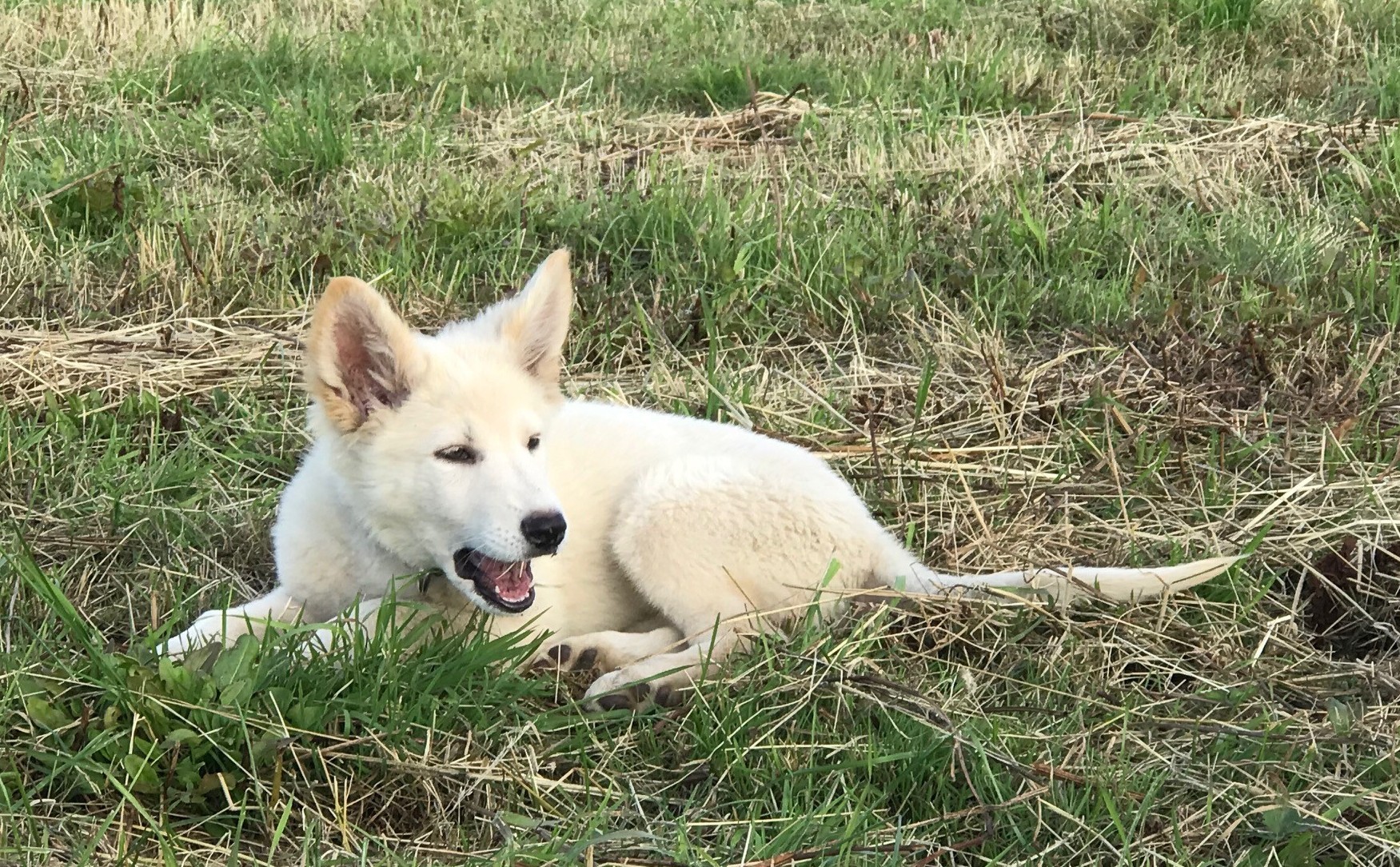 She has settled in well 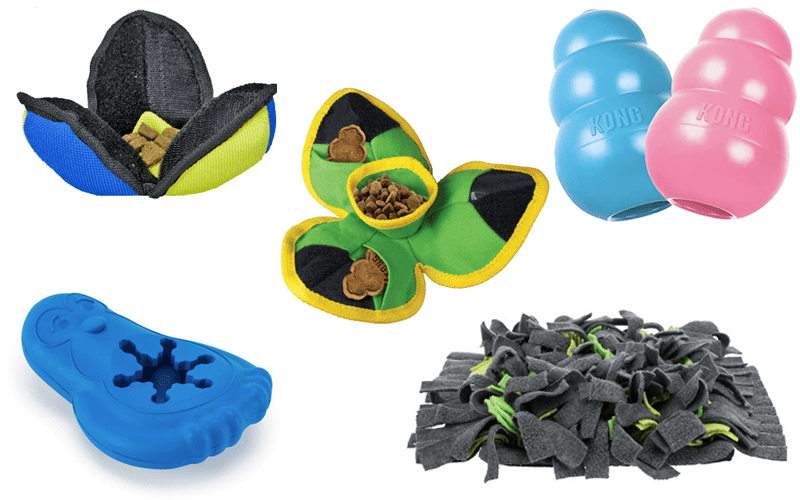 Rosie Loves: All tested and approved! 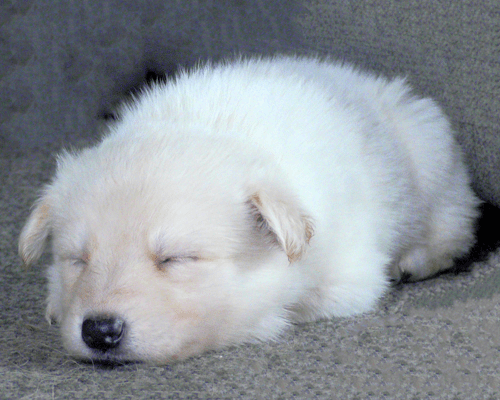 Getting a new puppy is an exciting time. You’ve probably spent ages thinking about it. Looking for the right dog. You may have visited it already with its mother, and now you’re just counting down the days until you can collect your puppy and bring it home. You’ve probably already picked out a name, the collar and lead or harness, and maybe even a dog bed. So, what haven’t you considered? 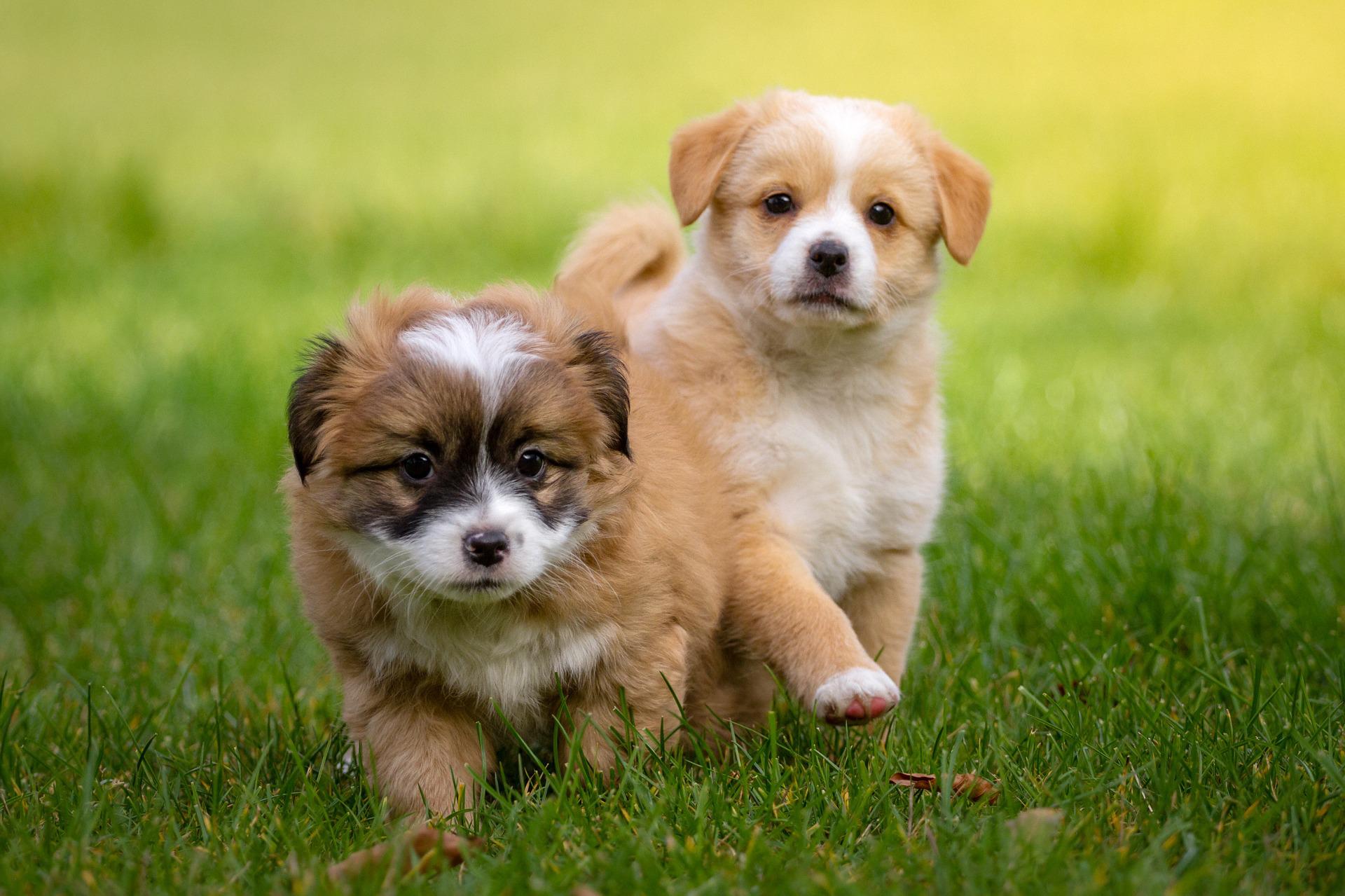 Well, one thing that we always think about is cables. These days with all the technology in use, there are lots of trailing cables all over most homes. Tilly was very keen on cables, so we tidy all these away and ensure they are out of reach of small needle teeth. You may also want to take a careful look around and move other things temporarily, like shoes, TV remotes and anything that could appeal to a curious pup.

Secondly, you need to consider where they will sleep. You may have their bed all picked out, but where will you put it and what will happen at night? Many years ago, when someone suggested crating a pup, we were very against it. Then we discovered that they really are beneficial. Not only that, the dogs loved them – it was their own little den. It may be best to have them in a secure area at night where they can’t get into too much trouble. 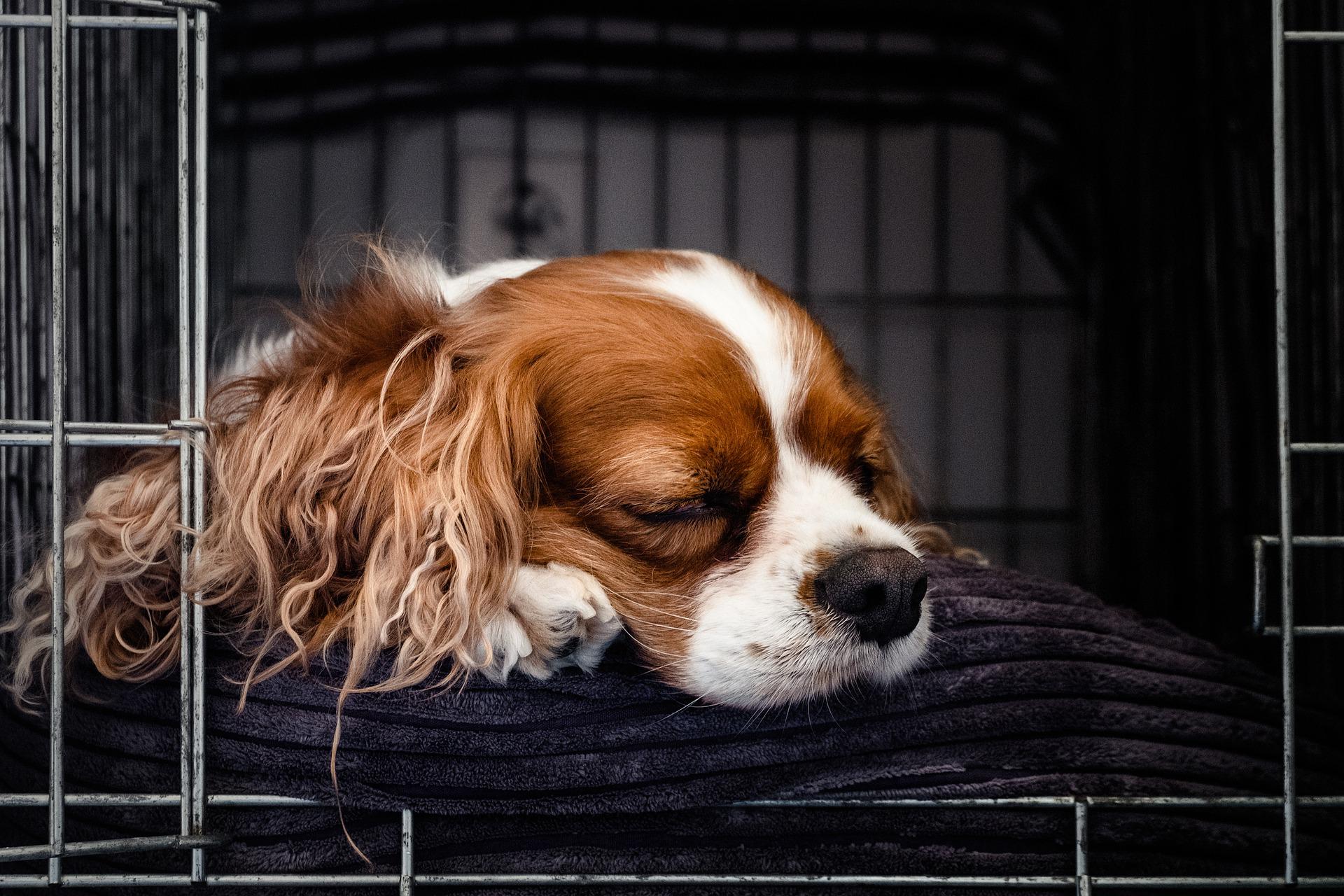 A safe haven for a pup

A crate may also be helpful for when you leave them during the day. Since, now that most people have returned to work, there will be times when they will be left home alone. Ensure that the crate is big enough for them to move around freely and perhaps give them a stuffed frozen Puppy KONG. It is NOT recommended that you leave them unattended for hours on end and make sure you crate train them first so that they actually feel comfortable in there.

What about outside? Have you got an area that is safe for them to run about? No toxic plants, things they could hurt themselves on, and more importantly, somewhere they can’t escape from, like gaps in hedges or fencing? 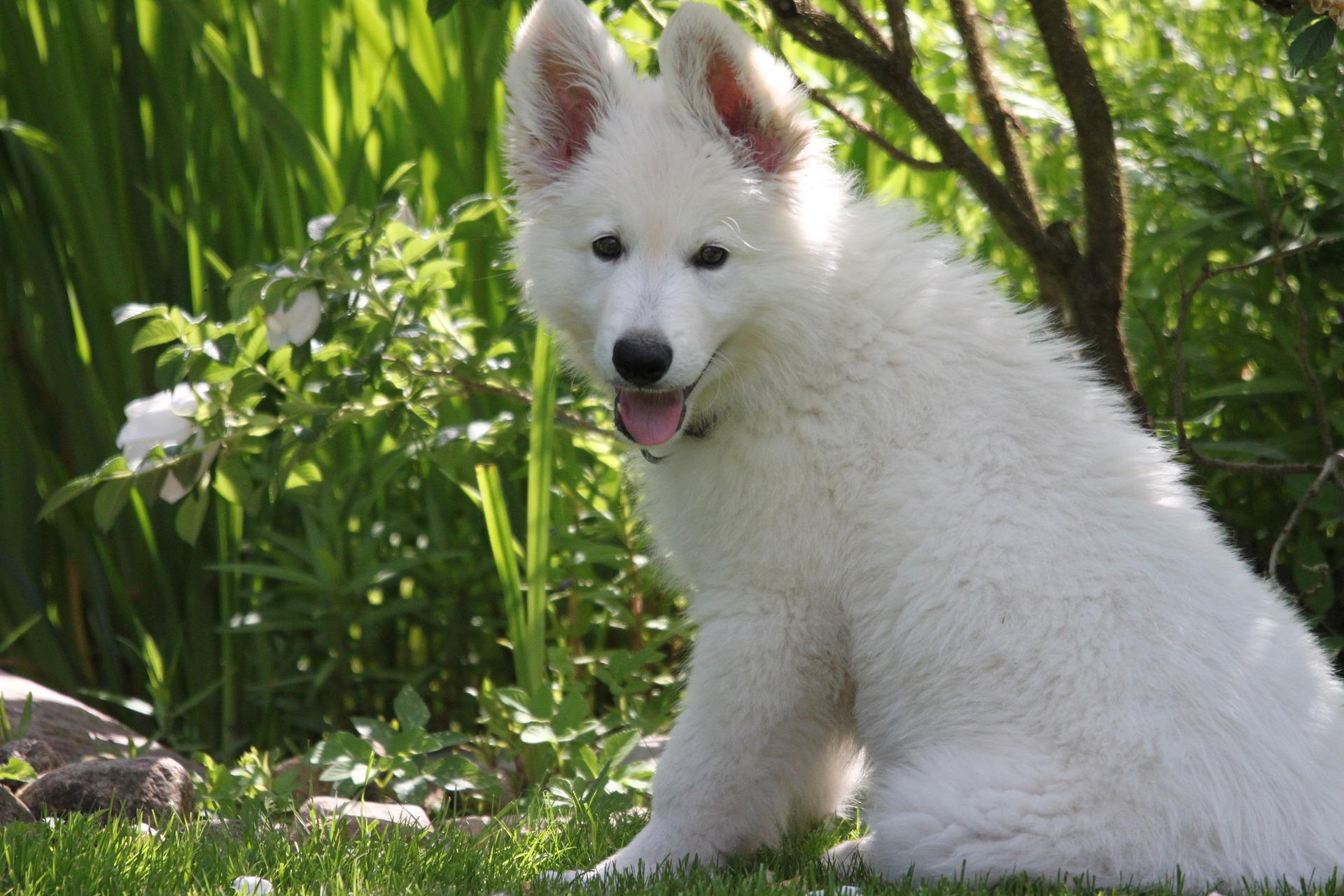 Then you need to consider their diet. The breeder will no doubt provide you with their current food to give you time to move them onto your choice of food, but you should have it ready in advance to mix in with the food supplied to make for an easier transition and minimise the risk of upset tummies.

If you are out at work, try and take some ‘pawrental’ leave for a week or so until they are settled in. Or at least try and arrange for someone to come in during the day to check on them and let them out for toilet breaks.

Speaking of toilet breaks, we always swore we would never have another pup during the wintertime as there is nothing worse than rushing outside every hour or so in the freezing cold or pouring rain! 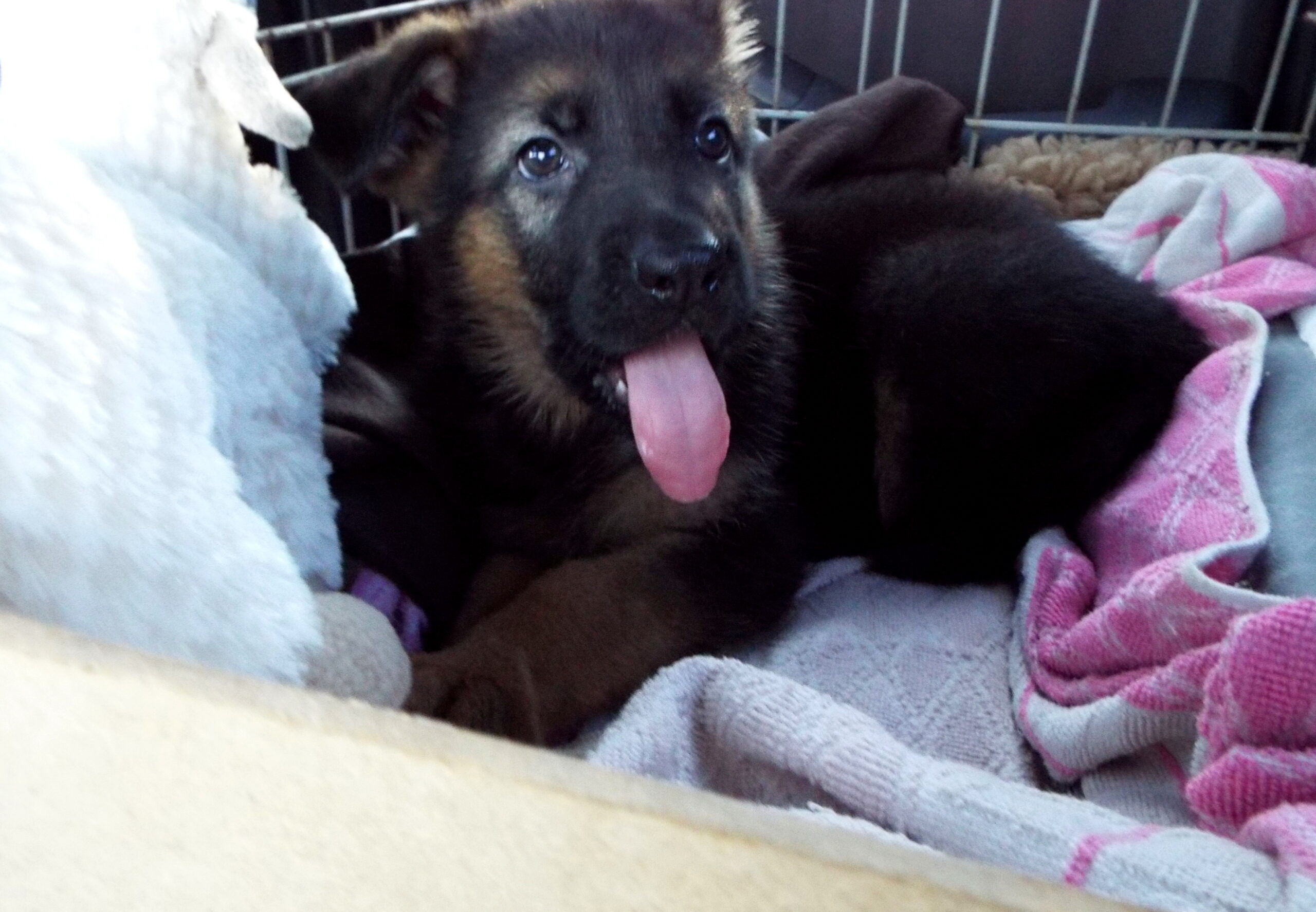 On the day you collect your new addition to the family, you may want to prepare a crate for the car ride home, especially if you have a longer journey. Ideally, this would be a two-person trip and the crate should be secured and stable on the back seat of the car beside you and give access to the puppy. It should be big enough to allow the pup choices about where to lie and with enough room for them to sit up. The pup needs to feel secure but not restricted. The base of the carrier should be thick and soft. This can help to reduce the vibration of the moving car and provides support.  An ideal arrangement would be a ‘donut bed’ which has soft, raised sides that provide support as the car moves, or use rolled-up towels around the inside. The first time they travel in a car will likely set them up for future car trips, so make it as pleasant an experience as possible. This may avoid trouble and particularly car sickness in the future.

All puppies are different. Some approach life without a care in the world, while others need time to adjust to new situations.  When you get your pup home, imagine what it must be like for them. They have been taken away from everything they’ve ever known and are now in a strange place with people and possibly animals they don’t know. It must be scary and confusing for them. Give them time to explore and be particularly careful when introducing them to existing pets. Certainly, don’t leave them alone together until they have had time to get to know each other. 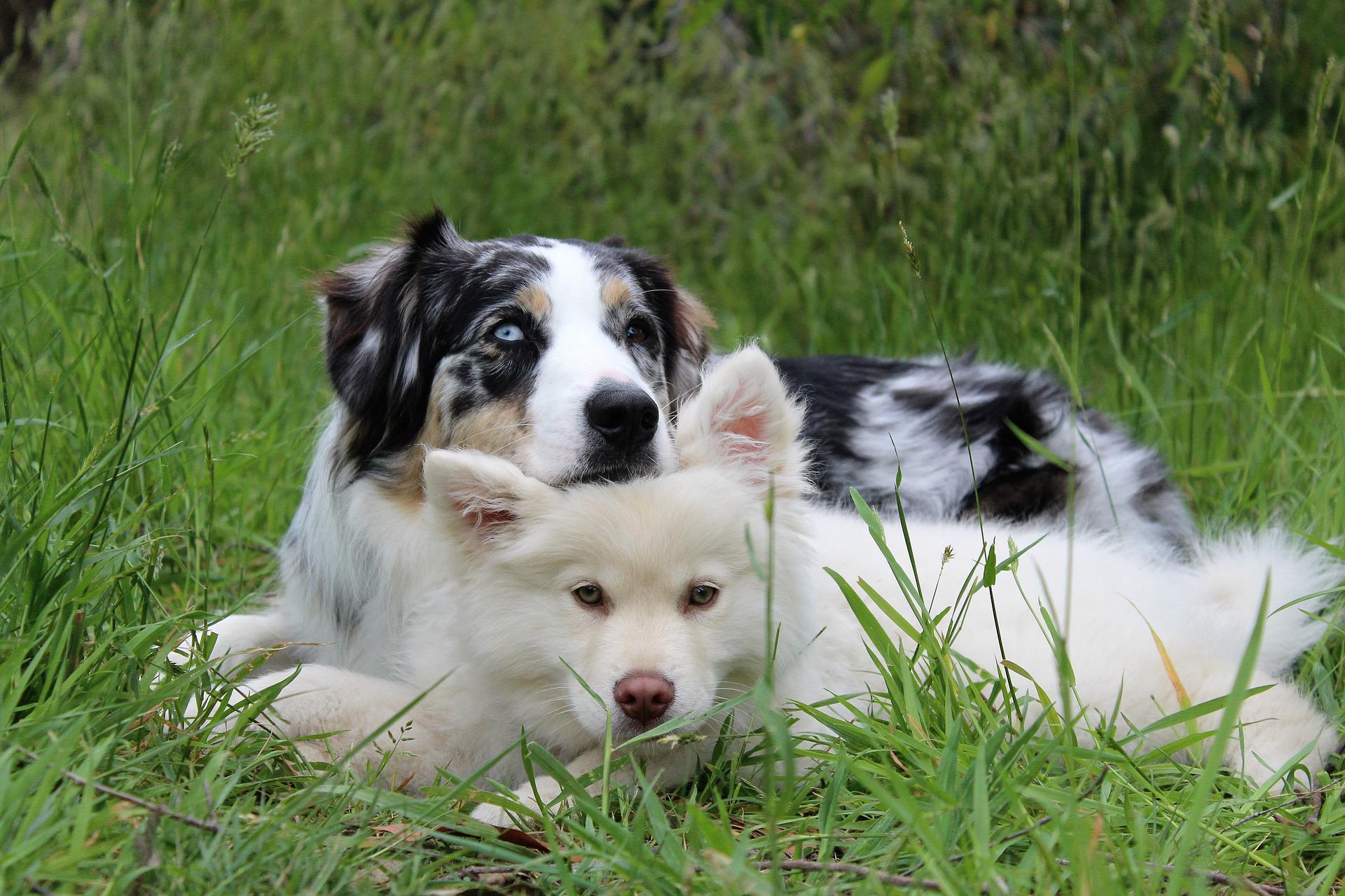 Introduce your pup carefully to other pets

Choose toys carefully. You don’t want something with small pieces that could easily be swallowed. Always supervise your pup with its toys. Treat dispensing and interactive toys are great as they tend to focus the pup more on getting to the treat and less on chewing – although they will chew. And remember, squeaky toys will likely drive you and other pets crazy. 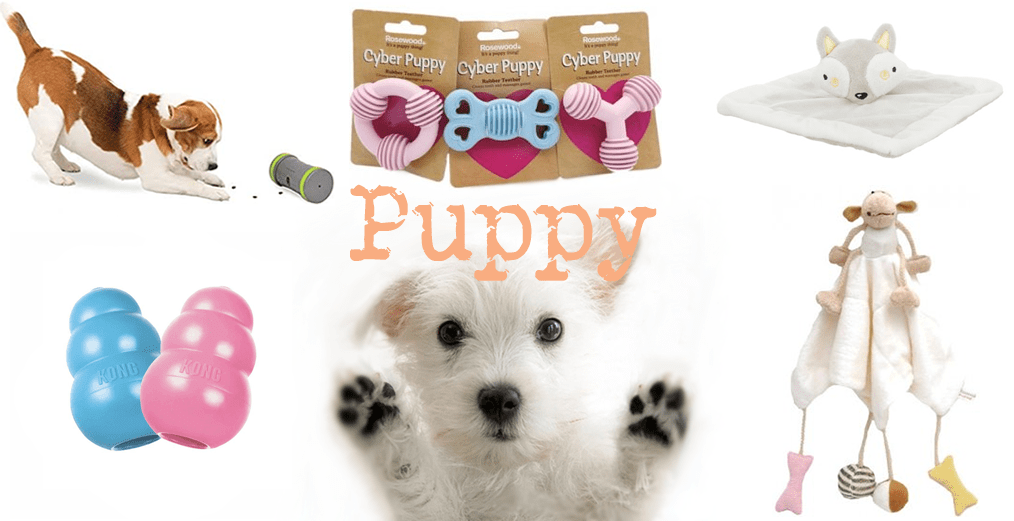 And finally, start training from the moment they get home. Don’t think you have to wait to attend a training class. You will be training full-time at home, not saving it for the hour a week you spend at a class. Get that clicker out – it’s so much quicker with a clicker – and get them used to being trained from the outset. Once they understand the basics of action and reward, it will make all future training easier and more fun! 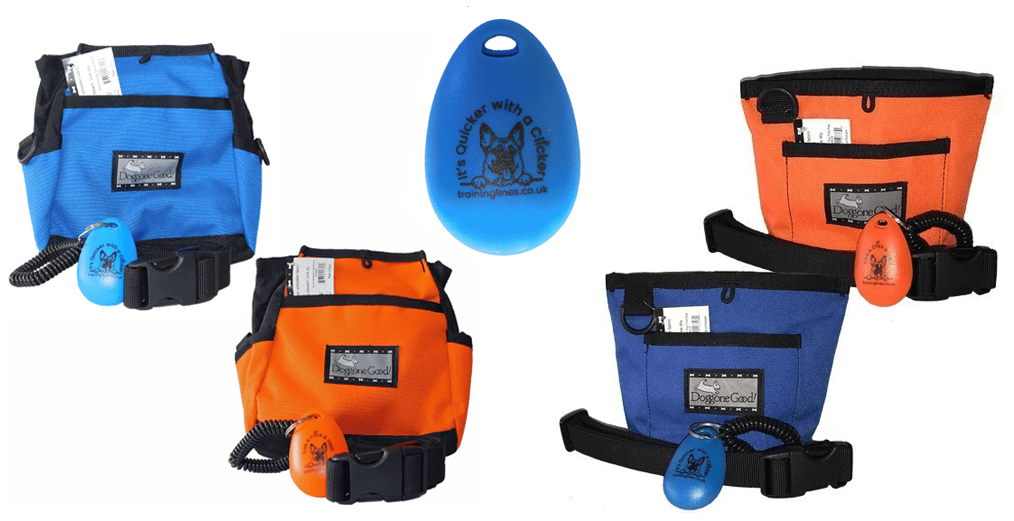 Get a head start with our Training Bag and Clicker combos – it really is quicker with a clicker!

Good luck with your new pup – you’ll need patience and humour to get through those first few weeks, but most importantly, enjoy it as they’re not puppies for long! 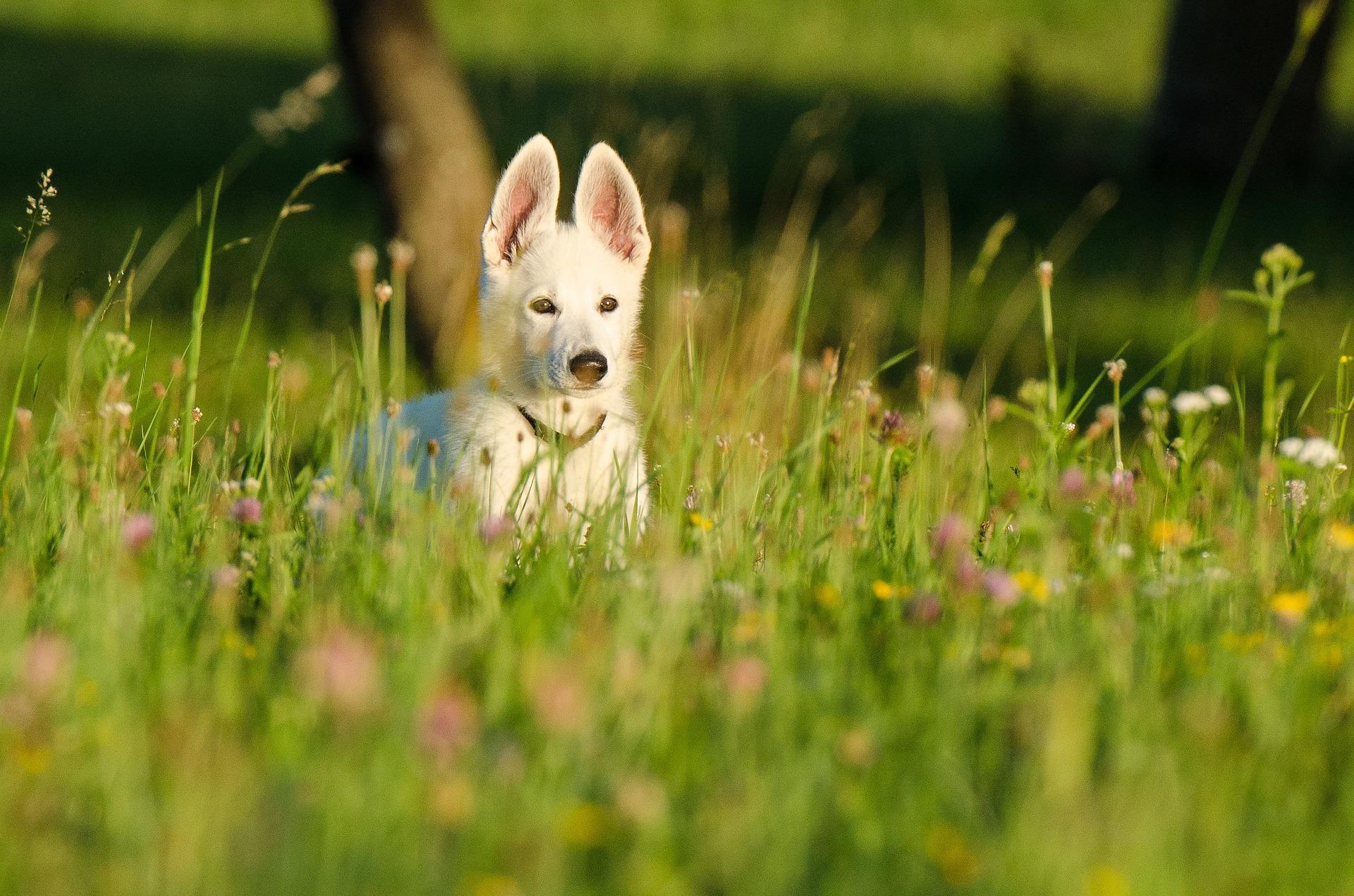 Enjoy your pup. They don’t stay that size for long!