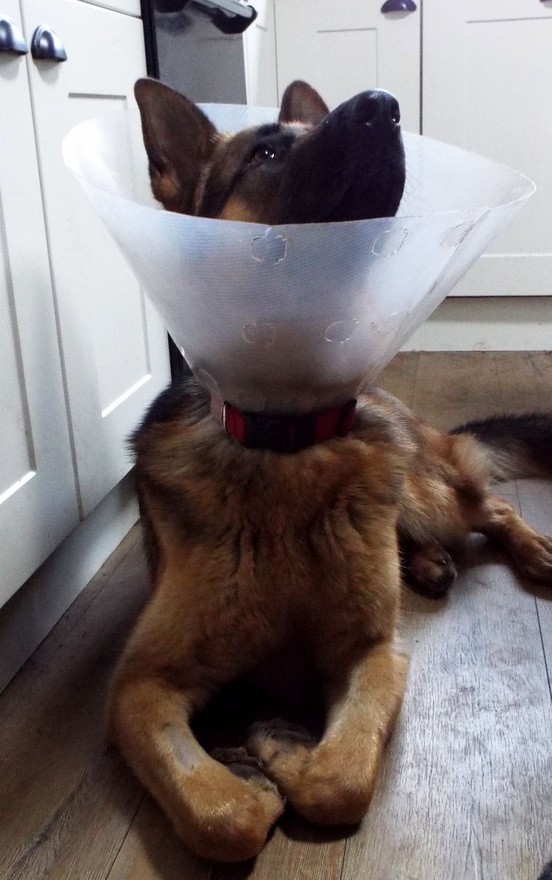 We could do with some shin pads…

Lambing is just about done, and we have a lovely crop of cute babies this year, although there have been some triplets which means we have had to bottle feed, topping up the mother’s milk. There is just one ewe left lounging in the maternity suite, but since we didn’t get them scanned this year we can’t be sure she’s even pregnant, we think she’s just enjoying the extra special treatment!

So, just when we thought we could go back to sleeping at night, Toby stepped up and put a stop to all that. First of all, he had a bad tummy upset, of course, it started at the weekend. On Sunday we cracked and took him to the emergency vet where he got antibiotics and some paste for his gut. We also discovered that the ‘starve them for 24 hours’ rule was no more. Apparently, it’s been decided that that isn’t effective. Toby was pleased, as despite his upset stomach, he was his usual ravenous self.

Sunday evening he set off for his walk and made a mad dash across the field where the rabbits hang out, smashing into a metal gate hinge on the way.

The result was a painful yelp and a limp for a few minutes. When he came inside afterwards, we spotted a small gash at the top of his leg which actually looked quite deep. A night of groaning followed and so Monday morning first thing he was back at the vet! They took one look and decided it needed to be closed up, so he stayed in and had quite a big operation. There was more damage internally and, of course, bruising, so now he has a shaved leg and plenty of stitches!

When we got him home, he was like a zombie for about 24 hours, but now he’s recovered slightly, and regained his energetic bounce.  We really didn’t want to put a cone on him as no dog enjoys wearing one, so he started off wearing an old pyjama jacket buttoned on his back to prevent him getting to his stitches. Sadly that didn’t last long, and as they began to itch, he began to nibble at them. We had to put the cone on him and felt so guilty because he was clearly stressed by it, however, a clicker and some chicken breast worked their magic, and he soon cheered up!

He’s now discovered the true power of the cone and uses it to great effect to manoeuvre around the house with everyone keen to clear a path for him. Heaven help our shins, and the rest of our bodies come to that!