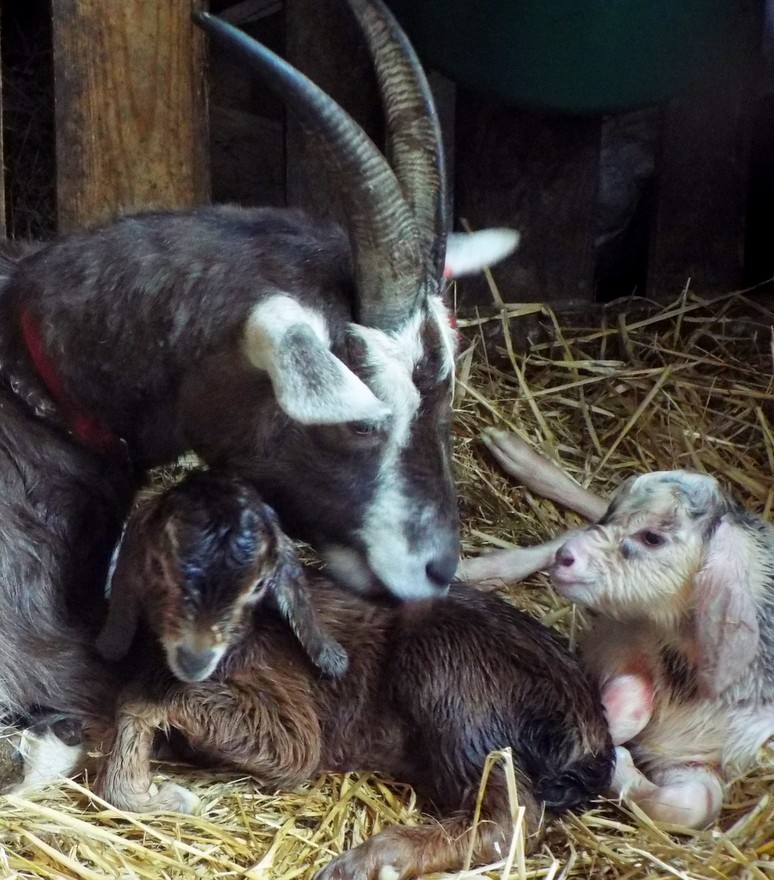 We relax into kidding

After the stress, lack of sleep and vets visits that accompanied this year’s lambing, we were pleasantly surprised by the lack of fuss over kidding.

Firstly, we knew the exact date that the goats had visited the billy so the due date wasn’t guess work, and secondly they usually get on with it on their own.

Even so, we were taken somewhat by surprise when Lulu kidded 3 days early.  She wasn’t interested in her food in the morning so we knew something was up.  By 11.00am she was laying down pushing and making a hell of a racket (sheep rarely make much noise at all).  Not long after that, she popped out two kids, one of each and was soon cleaning them up.  She had plenty of milk and was happy to let them feed.

A few days later, Betsy started, again a day or two earlier than planned but she followed a very similar pattern, giving birth to another boy and girl and requiring no assistance from us.

When the kids were just a few days old we took them to the vets for disbudding so they won’t be sporting horns like their mothers.  All four recovered quickly from their ordeal and are growing rapidly into cheeky little minxes that you have to keep your eyes on as they are constantly on the lookout for trouble!

Our other goat, Lily, also visited the billy but some time after the first two, so she missed out on being scanned.  If she is pregnant, she will be due in early June so we are looking forward to that and after the recent successful experiences, very relaxed about it.