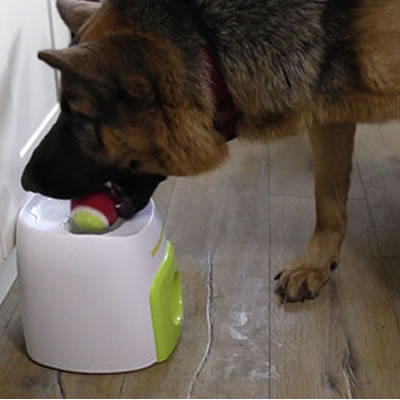 Toby has a crack at the Fetch n Treat

Since Toby Pup started returning his feeding bowl to us every day, which we developed into a fun game with all of the dogs’ bowls, we often try out different things to see how he gets on.

The Fetch n Treat is a simple mechanical toy that requires a dog to drop a tennis ball into a hole at the top. The tennis ball travels down the chute and rolls out of the bottom of the toy, and as it does so it trips a lever which causes treats to fall out too!

As Toby loves toys AND treats, it’s no surprise that the Fetch n Treat is a big hit!

We tend to use Pet Munchies treats in most situations. For this toy, we cut a Lamb Stix treat along the length and then sliced it into tiny pieces.  We felt that these small pieces would work better in the mechanism, and so it proved.

The first step was to encourage him to drop the ball in the right place. As he knows the ‘give’ command (most of the time), we encouraged him into position and said ‘give’ while he was above the Fetch n Treat, and with some minor deflection, it went in. After 3 or 4 goes, we saw the lightbulb moment in his face, and off he went. Such fun to watch! 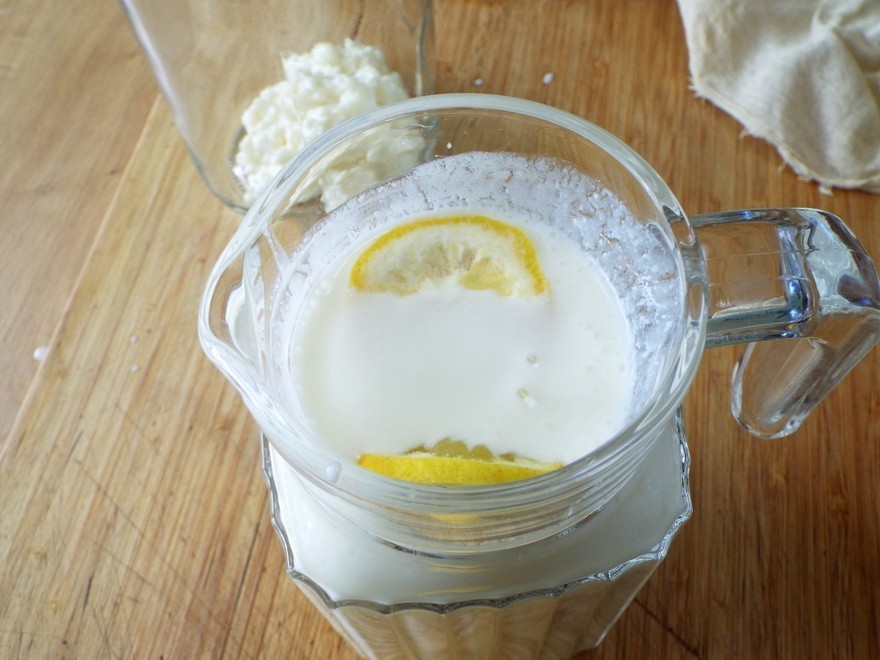 We get to grips with fermenting

When we had Betsy the milking goat, we began making Kefir as we had so much milk and we needed to find ways to use it!

It’s rumoured to be fantastic for gut health, containing a friendly probiotic and it’s so simple to make. You end up with a tart, slightly fizzy drink within 24 hours. Once you’ve bought your original Kefir grains, you can carry on making it forever, needing nothing else but fresh milk. And the grains multiply so you could potentially provide all your friends and family with their own supply.

On the TV this week, there was a programme called Save Money, Good Health and we were amused to see a section on making your own Kefir. At least they confirmed that it was indeed good for you as we have become quite addicted to it now! The trouble is, after losing the milking goat, we now have to buy milk, so it’s not quite so convenient any more.

In other news, Toby reached the grand old age of 1 year and we took him to the vet for hip and elbow scoring. We are now awaiting the results.

He has been as busy as ever learning new tricks and road testing products. See his latest Tobeo, showing how it’s done with the Fetch and Treat. 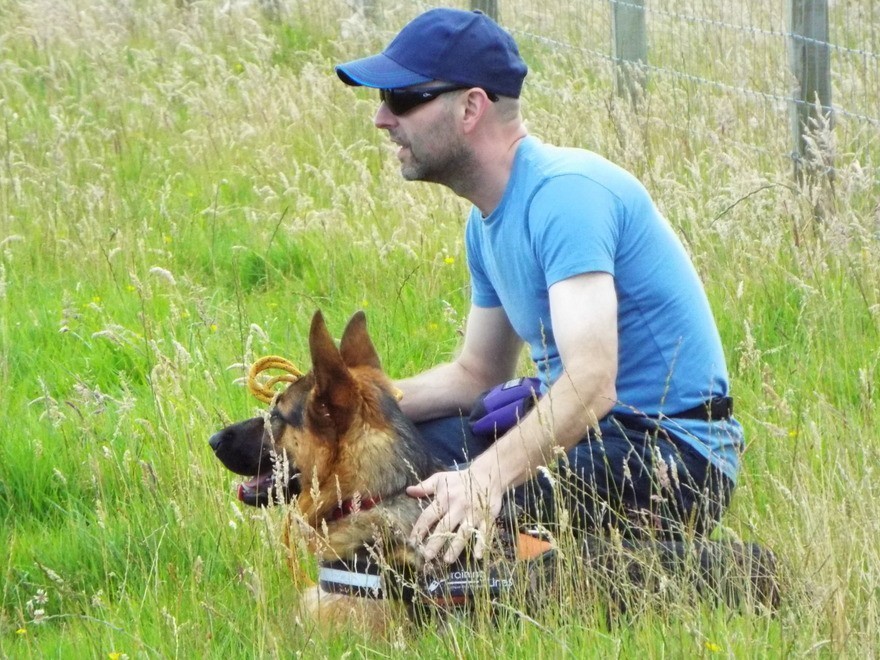 We are always looking for new things for Toby to try as he likes to be busy!  A local trainer mentioned she did tracking classes and we were keen to have a go with the boy.

She came over to give us some pointers to get us started and it wasn’t long before Toby was fully engaged.  We started by stomping out a trail, dropping cocktail sausages on the way and leaving a jackpot at the end.  He loved it and couldn’t contain his excitement, and proved to be an excellent tracker.  We decided to train a few times a week, and found that in the afternoons (our designated training time) he was pacing the house and whining to get going!

Then we hit a bit of a snag.  We started off by using fields where the grass was pretty long so the trail was easy to see, both for us and him.  We added complications like curves and doubling back and also crossing tracks from previous sessions, and we were convinced that it was his nose he was using, not his eyes.

However, then we moved to a different field where the sheep had recently grazed.  The grass was shorter and there were lots of other distracting scents to throw him off.  Firstly, we could no longer see the trail we had made, so it was difficult to ensure when we backtracked we were following exactly the same route, and secondly, when we set off with him we found it harder to tell if he was following the trail correctly!

We also introduced an “article” for him to find, which might have confused him further.

We will need to take a step back and try again when the weather is better, to ensure he has a good grip on the basics (standard practice when training new skills or behaviours), otherwise he will become discouraged and frustrated.

Speaking of the weather, thanks to daily rain, we have been unable to cut the grass for haymaking and the way things are going, we could end up with none this year! 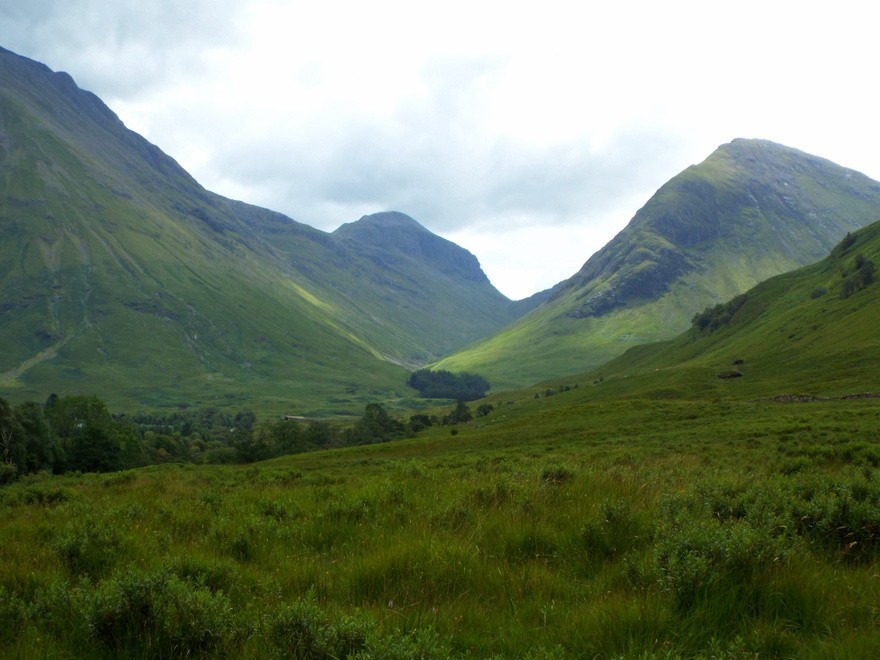 Sadly, this month we lost our milking goat, Betsy.  One evening she had an upset tummy and the next day she was gone.  It was quite a shock for us and we are left with only two goats, neither of which are in milk.  We find ourselves running out of milk constantly as we can’t get used to buying it from the shops!

She was milked twice a day every day and therefore we could never really leave the croft for very long.  In fact we haven’t both had a night away from here for the last 13 years!

As we had relatives staying with us who could look after the dogs and keep an eye on the rest of the menagerie, we took the opportunity to snatch a few days break on the West Coast.

We stayed in a lovely B&B and spent our days sightseeing at Fort Augustus, Fort William and of course, we couldn’t miss the great glen, Glencoe. The weather wasn’t great but it didn’t rain too much and thankfully, the midges were nowhere to be seen.

Now our batteries are recharged, we are ready to tackle hay making, should the sun ever decide to return.

In the meantime Toby is reaching the adolescent ‘naughty teenager’ stage in his life, and as he is also getting bigger and heavier, it is important to try and maintain his training while he works through it.  Not easy for us, particularly as his training classes have finished and the incentive to show off his week’s work has finished with them!

Thankfully he has one particular trick to fall back on, which he perfoms twice daily at feeding time – ‘Bring da Bowl’.  Once all of the dogs have finished eating, we line the bowls up and Toby fetches them all one by one!  Here he is in action: 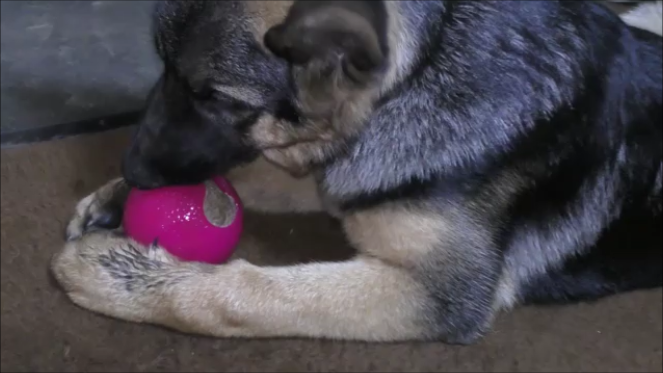 With Toby Pup’s episodes of high energy occurring at regular intervals, he really benefits from having something to focus it on. Thankfully, the KONG Company’s range of Marathon toys play right into his paws!

These fun rubber toys have a recess in the side that is shaped specifically to hold a Marathon treat firmly in place. The treat is mostly beneath the surface of the toy, and whilst Toby can still reach and taste it, it is deliberately difficult for him to get a good hold on it. Also, as he does manage to wear the treat down, it goes deeper into the toy and becomes harder to reach.

One added bonus we found is that the toys are hollow, allowing for small additional treats to be hidden inside as an extra incentive!

Toby has used his Kong Marathon Ball several times now, and although he has obviously got better at it, it still keeps him very well occupied.

Here he is in action: 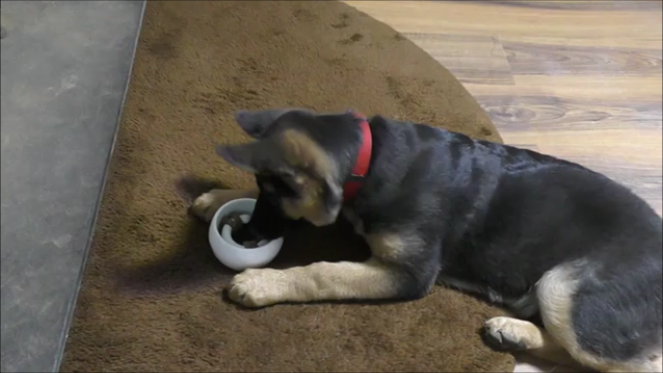 Toby Pup tries out a Treat Ringer Orb from Starmark

Toby loves trying out new toys for us, and today we introduce him to the Treat Ringer Orb from Starmark.

Starmark’s Treat Ringer toys are made of firm plastic and they have a wide outer with a hard to reach rail inside.  Edible Treat Rings are pushed onto this inner rail for your dog to try and remove. Not easy!

The Ringers are supplied with some treat rings, but they are available separately too for when you need to refill.

For most dogs it can be quite a challenging toy at first and during Toby’s initial 20 minute session he did not manage to remove one singe ring. However, during play the rings do become softer and easier to work.  Plus, as with most toys, dogs become more adept over time so in subsequent sessions he does manage to remove the treats eventually.

A couple of months on, and Toby still loves it!

See how he got on in our video below: 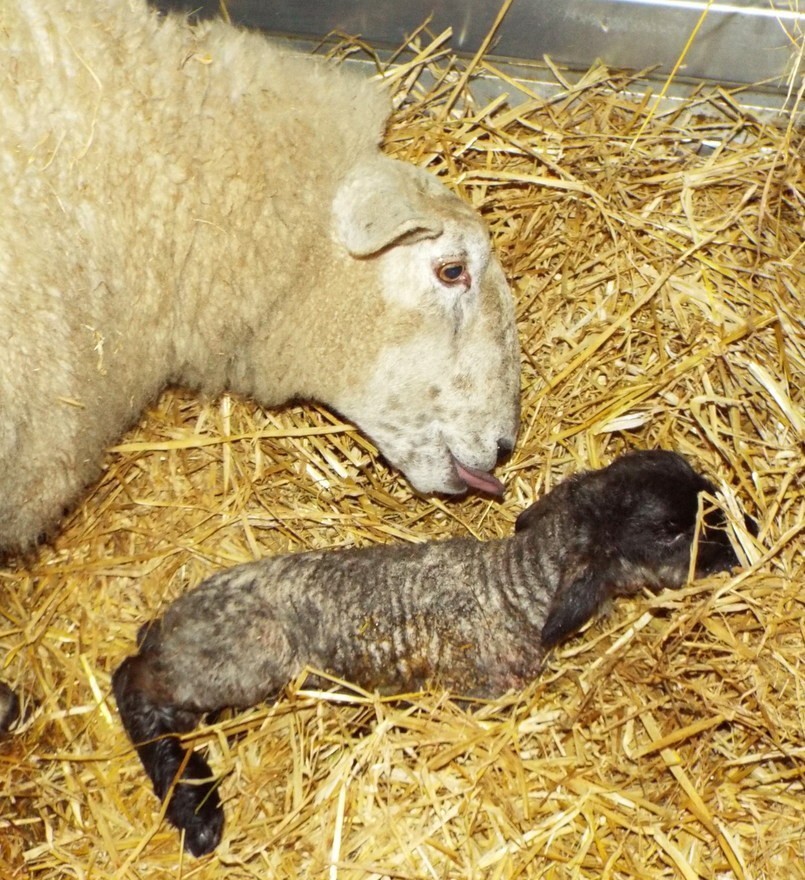