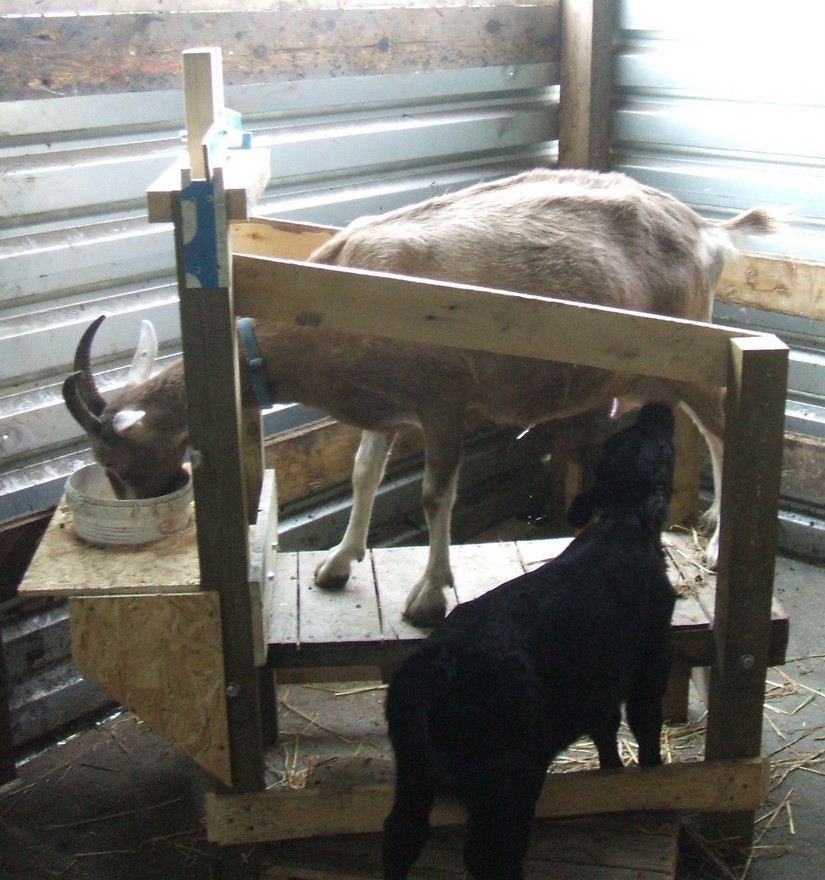 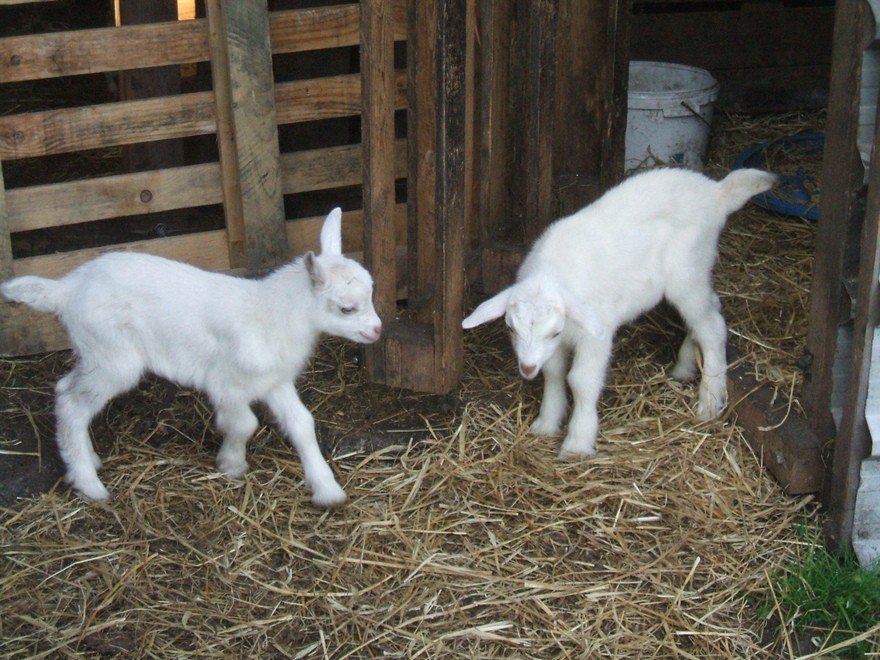 We have been extremely busy just lately..

At the end of June, one of our goats had kids (our first at the croft, due to some unfortunate timing last year). Everything obviously went without a hitch, as they were waiting for us in the pen one morning, newly born. They are doing extremely well.

We managed to harvest a small amount of goats milk for ourselves, and made some cheese. Delicious!

Our annual battle with the peats is finally over, all bagged and stored in the peat shed for another year. They should keep us going until the next time.

And, the grass is cut ready for baling. With the weather being even more unpredictable than usual, this is no mean feat! 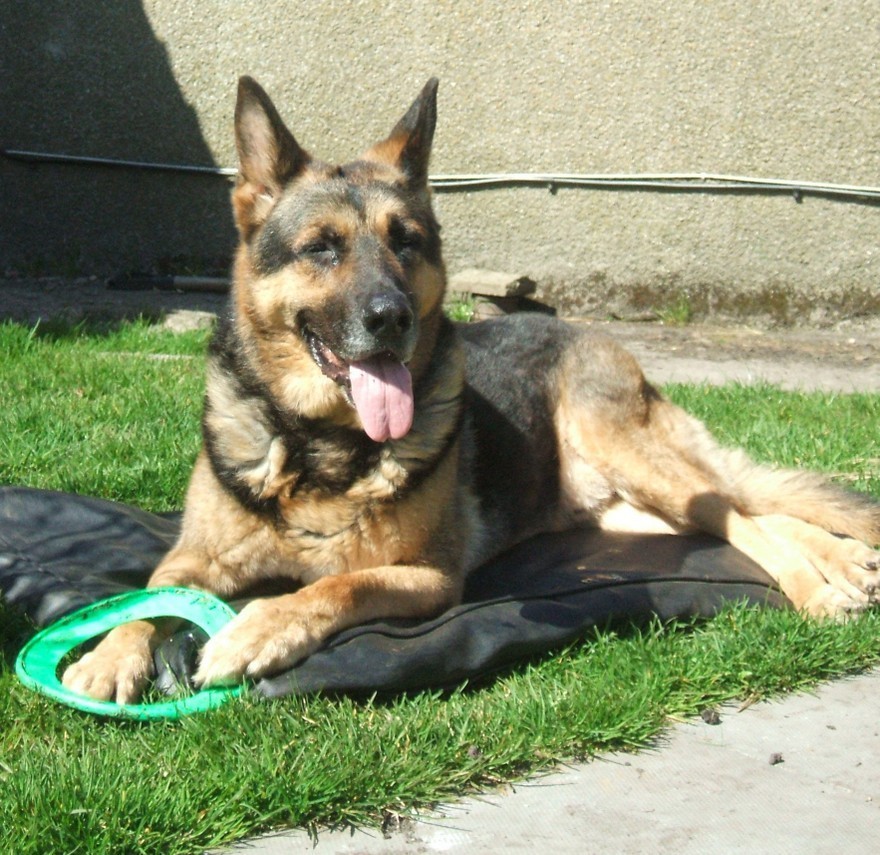 We say goodbye to a true gentleman

At the beginning of June, and after a long battle with CDRM, we lost our beloved GSD Blitz. He was 12.

We took Blitz on as a rescue dog 9 years ago, and never regretted it. Even with several other GSDs in the ‘pack’ it took him several months to fully settle in, but after that he showed his true character – a gentle giant with a bark that could pierce the eardrums!

18 months ago he was diagnosed with CDRM, after we noticed him dragging his foot, and 6 months later a large mass was found in his abdomen. Neither was causing any discomfort, but over time his mobility did deteriorate. With careful management though, and one or two home made devices, he remained comfortable and happy to the end.

We miss him terribly, but are extremely thankful for the extra year he gave us.

RIP Blitz, you will always be with us. 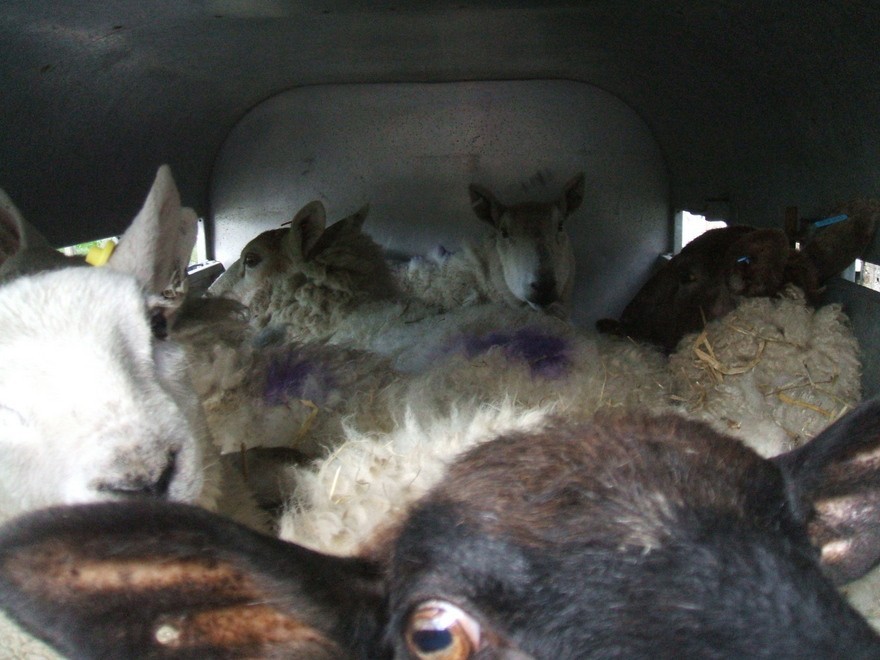 The sheep go off to mow some grass

After the long winter, and somewhat poor start to the spring, we found ourselves with a shortage of grass for the livestock to graze.

Our usual strategy of moving them around between 6 small fields worked for a while, but even topping up with hay left us with barely enough to go around. They were eating it faster than it was growing!

Luckily we heard of someone fairly local to us, that had an acre of grass which they found difficult to cut and keep under control. They were making it available to anyone with animals that could graze it. We jumped at the chance, and as soon as we could, our ewes and lambs were piled into the trailer, and ferried a couple of miles to their new temporary home. 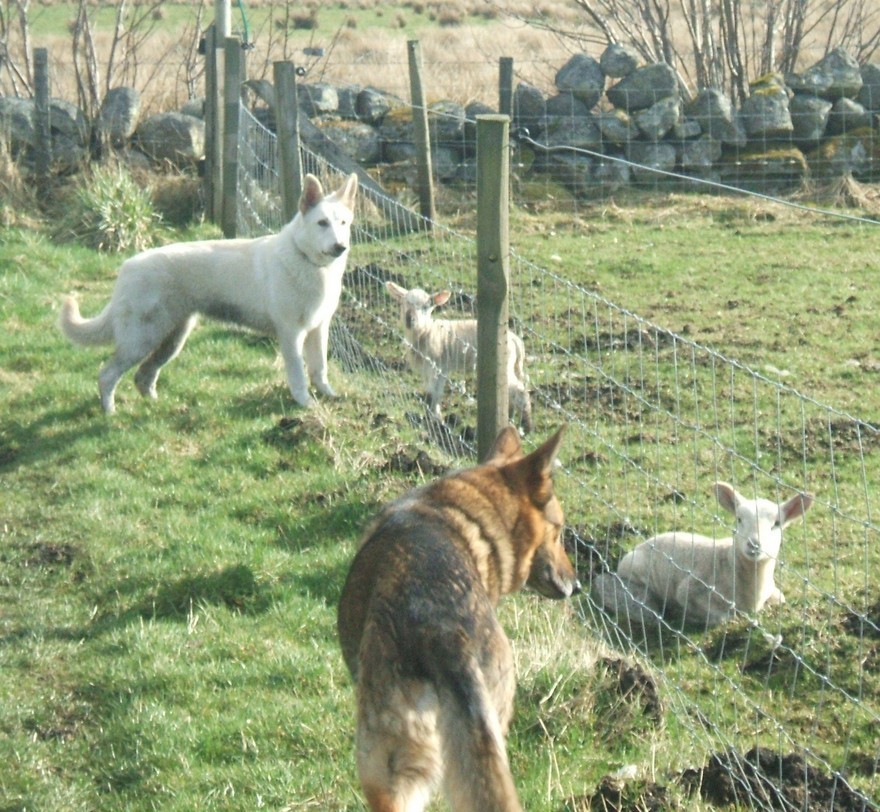 All of the lambs have now been born, and following some time inside the livestock shed (while the weather was still unpredictable), they have now been moved to their outside residence.

Luckily for us, we also have some ‘lamb monitors’ available to perform regular checks for us. As you can see, they enjoy their work!

Elsewhere, the polytunnel is starting to take shape with good signs of growth, and the grass is finally looking like making an effort. It will need to work harder though, otherwise our hay crop this year will be very poor.

The slow start to the season could make things quite tricky! 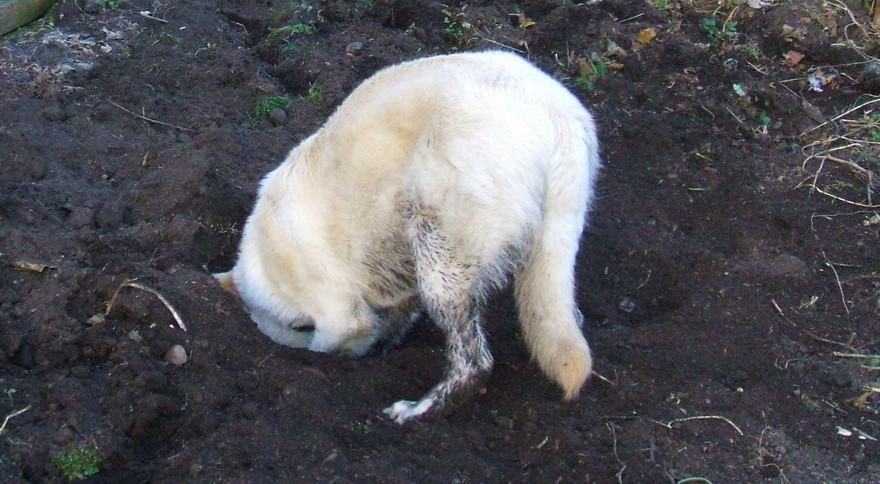 Working in the polytunnel

Now the weather is starting to improve (the last few days of gales and snow excepted), work has started to prepare for the growing season.

The contents of the polytunnel have been hacked into submission to clear some space, and some initial plantings have begun. Even though the temperature outside of the tunnel has been quite low, the protective layer of polythene does wonders for the inside. Jackets off!

Even daisy gets in on the act by helping the digging effort. Not quite sure what we’ll be planting in that deep hole, but it’s the thought that counts… 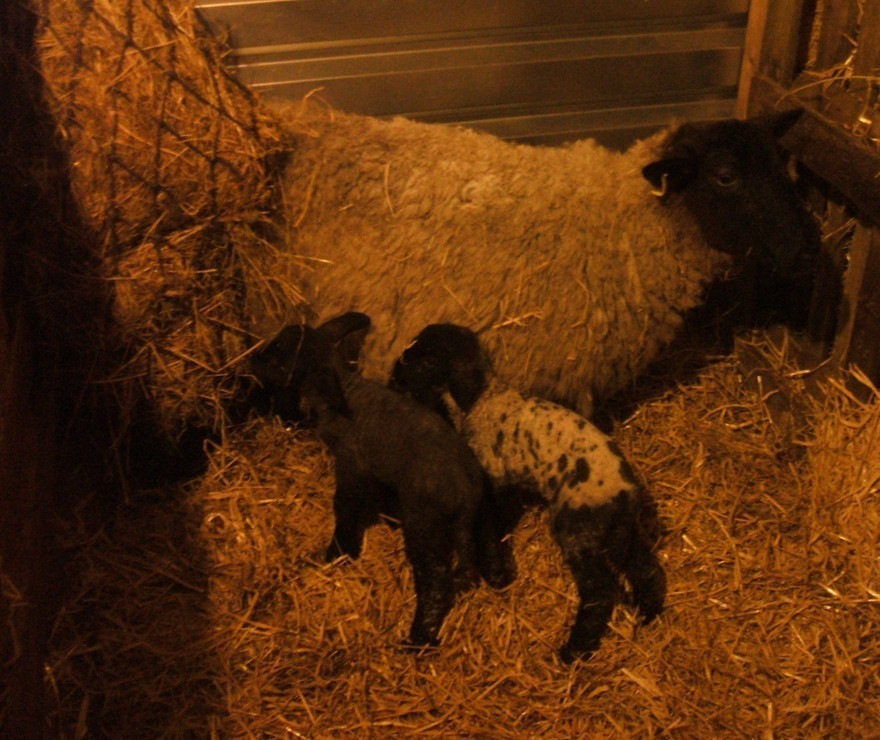 We discover a couple of new-borns running in the snow

With yet more snow this month, in between the really soggy thawing out periods, the going has been pretty difficult outside. Most of the animals have been moved inside, but we were just a little too late for one of our ewes…

We were feeding all of the animals in the late afternoon as always, and when we got to the sheep we noticed a couple of newborn lambs running about in the snow!

Whilst they looked healthy and dry (their mother had obviously been looking after them), the outdoor conditions were far from ideal. We very quickly moved them into a warm, dry pen (pictured). After a couple of hours, mother and lambs were doing well!

In the meantime, a quick look at our calendar revealed that these lambs were born at the very earliest possible date (taking the time with the ram and the typical gestation period into account), which caught us on the hop! 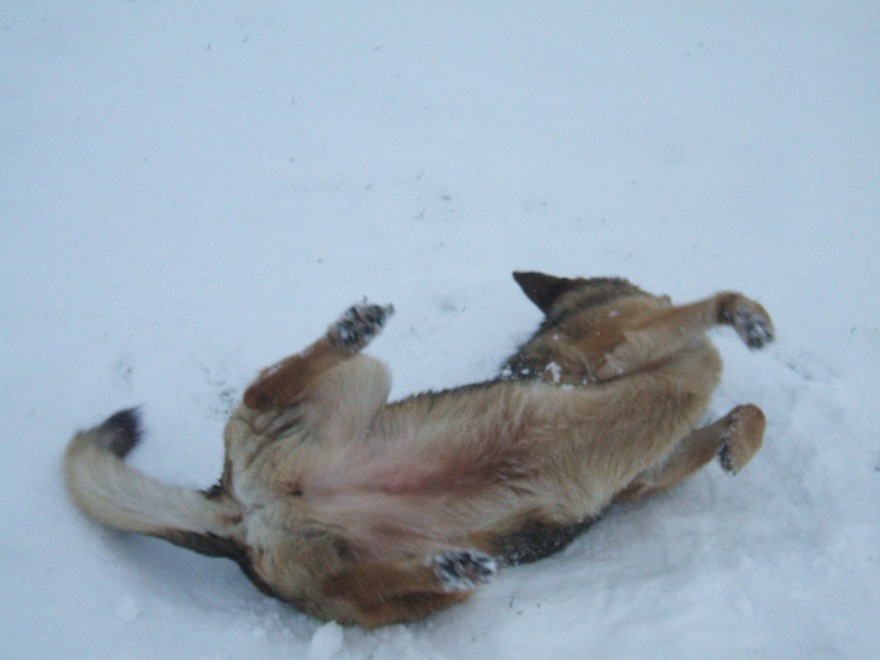 There is a time for snow, and that time appears to be now!

All of the dogs love it, although today’s depth seems to be at around 18-24 inches in the field, and it does seem to slow them down marginally.

And as Sophie (pictured) says, waste not want not! She can roll about in it all day!

More seriously though, it does make croft life very tricky at times, and feeding the animals is particularly challenging. We have brought all of last year’s lambs inside (the first time ever), and amazingly, we also managed to bring the cows in too!

Pippa and Co have always had a severe aversion to our livestock shed, but after a few false starts and by rattling a bucket of nosh, they were all comfortably in the small enclosure just outside of it. They go in and out of the shed at will (the door doesn’t shut properly because of the snow) which seems to suit them, and we think that gradually they will become less nervous about being there. 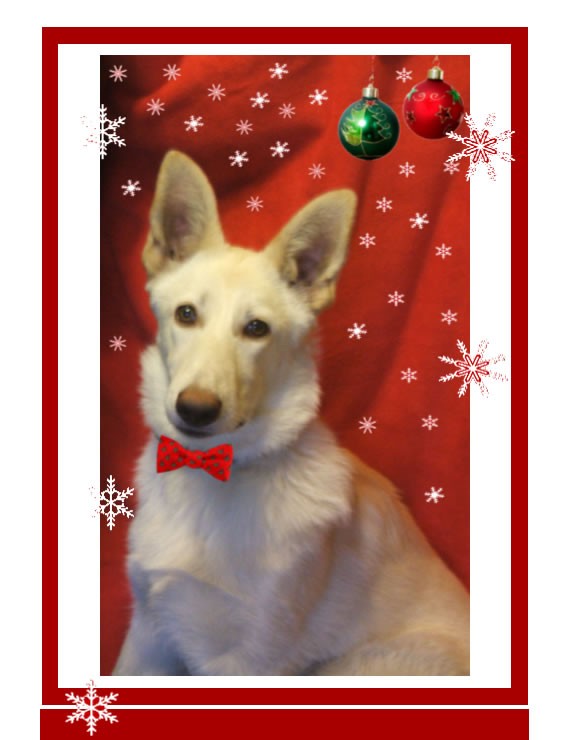 A merry Christmas from one and all

Christmas is almost upon us and as you can see, Daisy is certainly looking forward to it. As are we all.

We get a daily reminder when we go to feed the sheep each morning – our (German) Shepherds definitely like watching their flock!

Merry Christmas to you all, from the Croft.

As our chickens have seen a few summers now, our egg production has dropped off considerably over the last couple of months. To remedy this, we got some new layers through a neighbour of ours around the middle of October – 8 shiny new pullets.

Although it has taken a little while for them to settle in with their ‘elders’, they are now starting to lay quite regularly despite the long evenings.

We won’t reach the dizzy heights of last year, where we ate so many eggs we were starting to resemble them, but hopefully we won’t go short either. We see a glorious menu of omelettes, cakes, etc ahead. Yummy!